1970 Ford Mustang Hides a Shelby Secret, Feels Like the Perfect Mix of Old and New

Building a project car can be quite stressful: before, during, and even after it's done. And it doesn't matter how well you think the project through, someone is still going to complain about it. If you want to keep your sanity, the best way of dealing with these people is to simply ignore them. You know what they say: don't feed the trolls!
22 photos

Some would argue that 1970 was a pretty good year for the Ford Mustang. Already halfway through the lifespan of the first generation, a new Boss 429 ci (7.0-liters) V8 option was added. And that boasted an impressive 375 horsepower, more than any other Mustang before it. Ford introduced the Mach 1 just a year before, and it had already sold quite well: more than 70,000 cars in its first 12 months!

Those who opted for a Mach 1 had several engines to choose from, ranging from the standard 351 ci (5.8-liters) Windsor V8 up to the 428 ci (7.0-liters) Ram Air Cobra Jet and Super Cobra Jet. With that being said, a Mach 1 from that period would normally have between 250 horsepower up to 335 horsepower. That's still enough to have fun with, but it's going to feel underpowered by today's standards.

We came across this 1970 Ford Mustang on BaT, and it's got quite the story. According to its Marti Report, it was built in Dearborn, May of 1970. It was powered by a 351 ci-4V V8 engine, which was good for just under 300 horsepower at the time. It's still a Grabber Blue Mustang to this day, and the white vinyl Mach 1 bucket seats are still there as well.

For 1970, Ford built a total of 198,239 Mustangs. Just under 41,000 of those were Mach 1 models. This car right here is one of less than 3,000 with the given engine and transmission combo. And it's one of 734 to be delivered in this paint and trim code. But this is no longer a Mach 1 per se, seeing that its original engine has been swapped out in favor of something slightly more capable.

It's now packing a 2009 Shelby GT500 V8! That's a supercharged 5.4-liter unit, and – according to the dyno runs – it's still good for 520 horsepower and 493 lb-ft (668 Nm) of torque. And that kind of makes it more exciting than a modern-day Mach 1. The four-speed manual transmission was also replaced with a Tremec six-speed manual. Still, the engine swap and the fact that it has Boss 5.4 graphics on it have upset the purists.

They are claiming that the owner should've used a different base for the project, and not ruined a Mach 1 in the process. But if you're a function over form kind of man, wouldn't you have done the same? This car features multiple other upgrades from newer Mustangs. The front suspension was modified to accommodate the changes, and it has adjustable Viking coil-overs and front spindles that came off of a 2003 Mustang Cobra.

The same type of coil-overs was installed in the back as well, and more Cobra parts were brought in for the brake system and rear axle. While total mileage is unknown, the car has only been driven for 1,340 miles (2,156 km) since the rebuilt was finished. The car is located in Dublin, Ohio, and with 5 days to go before the auction is over, the highest bid stands at $40,500. The seller has provided some videos of it as well, and the price is bound to go up over the next few days. 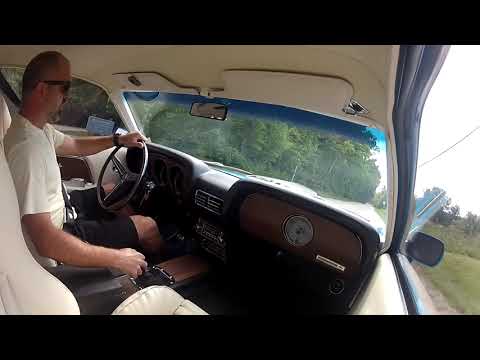