3 How to Upgrade Your Muscle Car the American Way, with Steeda

5 Ford Mustang Ice White Is Just an Appearance Package, Brings Vintage Back in Fashion
Car video reviews:
Up Next

Ducati Sales This Year Have Already Outpaced the Entirety of 2020

With Ken Block now working closely with Audi, you could say that Ford needed a replacement stunt driver for the video projects. Luckily, Vaughn Gittin JR is a long-time Ford athlete. His departure from Formula Drift gives him more space for special Ford Performance projects, and the first big one has just dropped today.
19 photos

Back in July, I noticed that Loren Haleston, one of the pro videographers with a lot of experience in drifting, had traveled to the Faroe Islands. And Larry Chen, the world-acclaimed photographer was there as well. They were working on a new project with Vaughn Gittin JR. featuring the Ford Mustang Mach-E 1400. And here we are today. The video is now online. You might want to get some popcorn and play it on a big screen TV, it's worth it.

The almost 13-minute long production is a mixture of impressive sights and electric hooning that will make you want to visit the Faroe Islands ASAP. It seems quite fitting to bring out an EV for the task, considering how clean and serene everything looks like on the island. The livery has been updated for this project, and you could say that it's somewhat reminiscent of Vaughn's drift car design.

It also seems like under glow lights are making a comeback, and the tunnel shots look great, to say the least! There are some funny parts here in there, and also an attempt to create a backstory. But ultimately, this video is all about Vaughn shredding tires throughout the island. The Mach-E 1400 is being driven in Unbridled mode throughout the video, and at one point, we get to see that the battery level is at 68%.

To further emphasize how "green" of a vehicle the Mach-E 1400 is, Vaughn drives it up a hill and starts charging the car by using power coming from a windmill. In case you're curious what kind of cameras have been used for production, it seems that the Red Komodo played an important role in this project.

"Free Rein" might be a good first step towards convincing users that the Mach-E can be just as much fun as a regular Mustang. But Ford still has some work to do to convince the hardcore petrolheads that going electric is the way forward. 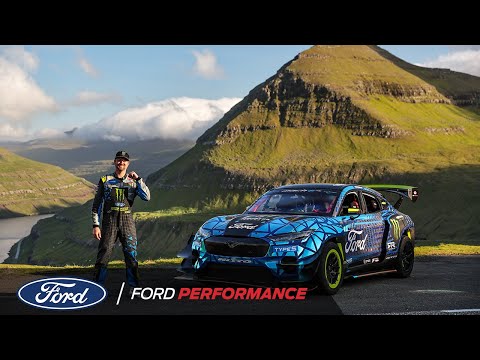