Mircea Panait
Following a 17-year hiatus, the Mach 1 returned as a track-focused fastback. Steeda is developing go-faster upgrades for the GT350-replacing pony car, and customary of a third-party outfit, the Florida-based company was curious about the drivetrain’s parasitic losses.
16 photos

Chris Cervenka, the e-commerce marketing director at Steeda and proud owner of a GT350, is much obliged to report that a bone-stock Mach 1 develops 409 horsepower at 6,600 rpm and 375 pound-feet (508 Nm) at 4,900 rpm. Those are the rear-wheel numbers, and they’re pretty good compared to the crankshaft figures of 480 horsepower and 420 pound-feet (570 Nm), respectively. In other words, the 5.0-engined newcomer loses approximately 15 and 11 percent from the Coyote lump to the wheels.

Priced from $52,720 or $12,600 more than the GT Premium Fastback on which it’s based, the Mach 1 in the following video is finished in Twister Orange, adding $495 to the tally. The 10-speed transmission is $1,595 more than the rev-matching manual, and while on the subject of swapping cogs, Steeda performed the dyno run in sixth instead of seventh because the car would have hit the factory-rated top speed on the dyno in seventh gear.

Another option that’s definitely worth mentioning if you’re interested in driving at the limit of grip is the Mach 1 Handling Package this car doesn’t feature, a $3,500 bundle of go-faster parts that include 19- by 10.5- and 11-inch aluminum wheels complemented by Michelin Pilot Sport Cup 2 summer-only performance tires. Adjustable strut top mounts, a Gurney-flapped rear spoiler, front splitter, revised chassis tuning, black rear-wheel lip moldings, and a split-folding bench are listed by the online configurator as well.

Although it doesn’t hold a candle to the flat-plane crankshaft V8-engined GT350, the Mach 1 may be the final derivative of the S550 as Ford prepares the Flat Rock assembly plant for the S650. The seventh-generation program was confirmed a year ago through a job listing from the Ford Motor Company, which suggests 2022 for the 2023 model year for the all-new Mustang. 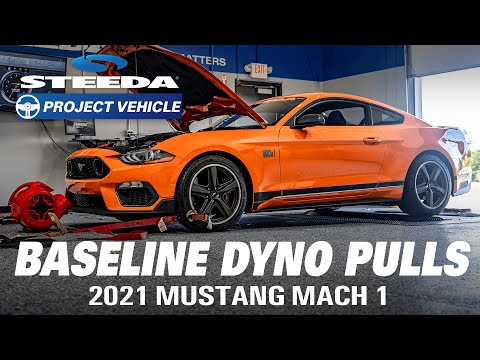