1 840-HP Cutlass Looks Fast, Gets Beaten by a Girl

This Mouth-Watering Ducati Monster 750S I.E. Has a Mere 2,500 Miles on the Clock

All good things must come to an end. And so is the case for the "Hoonicorn vs the World" series. This second season has gone by in a flash, and it's hard to think that we're probably going to have to wait another year for the next one. Ken Block's daughter, Lia, has certainly proven that she's got the skills and the will to make it in this game.
10 photos

Less than a month ago, Ken Block revealed that he won't be driving the Hoonicorn for the second season of a series that he launched in 2020. Instead, he had been secretly training his daughter to take over and continue his legacy. Lia Block may only be 14 years old, but that doesn't mean you should underestimate her. Her first challenge was a 4,000-HP NHRA Corvette, and then a 6-second GT-R was next.

She didn't get scared by a twin-turbo Ferrari F12 either, and after that, she took on the mighty Tesla Model S Plaid as well. A Pikes Peak race car was up next, and then she went up against a 1,100-hp Polaris RZR. While the episode against the Oldsmobile Cutlass was slightly less exciting, Lia found herself having to climb yet another mountain. The Boosted Boiz Toyota MR2 might not look like much at first glance, but then again, wait until you get to know more.

You probably know the specs of the Hoonicorn at this point, but in case you forgot, Lia's dealing with 1,400-hp at the push of the throttle. The twin-turbo Mustang only weighs in at 2,998 lbs (1,360 kg), so do the math on the power to weight ratio! The MR2 is still a work in progress kind of build, but the Honda K20 motor inside is still good for roughly 1,300-hp. Seeing that this vehicle only weighs 2,300 lbs (1,043 kg), with the driver inside, it may yet stand a chance in this race.

But we should consider the fact that it only has RWD, and that it's not as extensively built as its opponent. After a quick analysis, most of the people that are at the track for this race are betting their money on Lia. In case you had any sort of doubt about her skills, prepare to have your mind blown away! The moment the race starts is the moment that Ken's daughter rockets into first place, leaving her opponent completely hopeless.

Some will argue that this is a no-prep race and that things would be different if some VHT had been sprayed onto the track before the start. But we should also consider the fact that Lia's reaction times and launching skills are impeccable. It doesn't look like she enjoys losing in any way, and we can only imagine how far up the ladder she's going to make it over the next decade.

For the second run, the Hoonicorn will be starting from further behind to even out the odds. But the Hoonicorn doesn't seem phased at all and wins once again. That means that Lia has already won because this was meant to be a "Best 2 out of 3" format. But they still go out for one last take, with the MR2 getting a 3-car advantage at the starting line. That might sound like a lot, but not if your name is Lia Block! 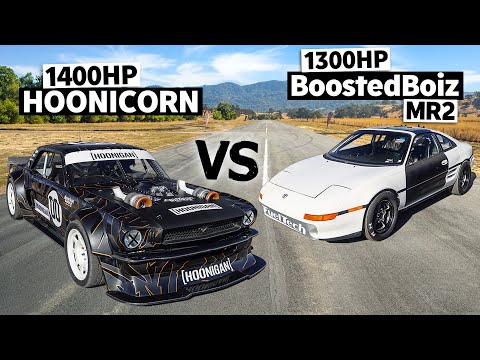