5 1,400-HP Hoonicorn Is Coming Back Stronger, It's Ken Block vs the World
Car video reviews:
Up Next

Facelifted 2023 Audi A6 Drops the Fake Skin in a Fake Way, Can You Tell What's New?

Home > News > Auto Motorsport
9 Dec 2021, 22:15 UTC ·
by Stephen Rivers
Ken Block's Hoonicorn is legendary for so many reasons. It's all-wheel-drive, it's a gymkhana superstar, and it has 1,400-horsepower. Is all of that legend and mystique enough to put a brand new Tesla Model S in its place?
6 photos

If the matchup sounds a bit one-sided, let us lay down a little more of why they might be perfect rivals. Clearly, the Hoonicorn is the pinnacle of old-school cool automotive technology. Tesla is precisely the opposite.

The Hoonicorn requires a great deal of dedication and skill to master. Driving it fast isn't a simple task. The Plaid is, again, the complete antithesis.

It's not far from a video game where a simple press of the X button makes the car go. So will the Plaid manage to be quicker simply because less effort is required to make it go faster? No.

For the first race, the folks at Hoonigan don't use the entire drag strip. Soon we get a clue as to why. They set up the finishing flag 1,000-feet away from the start. The Tesla gets a great, albeit questionable, launch and nearly gaps the Tesla to the 60-foot.

Then the twin-turbos and the super sticky tires of the Hoonicorn take over. By the time the race concludes, the Tesla is a good four or five car-lengths back. So the rules get mixed up for race number two.

The Tesla gets the hit, and the track gets reduced to just 500-feet. Lia Block, Ken's daughter and the one driving the Hoonicorn, smokes out the tires on the start and consequently can't catch up. Of course, she is on the bumper of the Tesla when the race ends.

Then they go heads up for the final race. The Tesla cuts a nearly perfect RT but, of course, still gets reeled in again. One of the Hoonigan guys pokes fun at its driver by saying, "I know you didn't do anything but pay for it... but nice work".

And that seems to sum up the race. The faster car is still faster so long as its driver is skillful enough to handle it. And Lia is certainly a chip off the old Block. 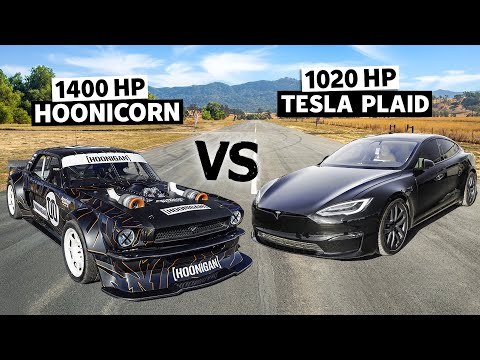