3 1,400-HP Hoonicorn Is Coming Back Stronger, It's Ken Block vs the World

You win some, and you lose some. You can't experience the joy of winning without feeling the bitterness of defeat. But the Hoonicorn has been pretty much undefeated so far in its drag racing ventures. While some of Mr. Block's fans were happy to see that, some asked for more powerful opponents.
12 photos

And the team over at Hoonigan paid attention, and so, "Hoonicorn vs the World" was brought back for a second season. Only this time, Ken Block wasn't going to do any driving. After having his 14-year-old daughter Lia go through drag racing school, he gave her the keys to his 1,400-hp AWD Mustang. And she performed flawlessly in the first episode of the second season, going up against a certified NHRA Chevrolet Corvette.

But she wasn't going to have it easy for this second race. The team brought out a drag-spec Nissan R35 GT-R, a car they've featured before. This is the same quarter-mile monster that crushed a 1,500-hp Chevrolet Corvette about 6 months ago. And that makes you wonder. If this thing was faster than a 1,500-hp 'Vette, isn't it going to devour the Hoonicorn as well?

But let's not jump to conclusions just yet. Let's have one more look at the specs of both these cars. The Mustang's twin-turbo V8 churns out 600 less horsepower than the GT-R's twin-turbo V6. While the Hoonicorn is running on a 6-speed Sadev gearbox, the "Kimbo" Nissan is packing a 6-speed DCT transmission. Both cars have the benefit of AWD, but Lia Block's car is 500 lbs (226 kg) lighter than that of her opponent.

As the GT-R is running on Hoosier tires, chances are that it's going to be quite effective at putting the power down. Even though it's the heavier car here, the extra-horsepower is bound to give it the upper hand, regardless of the race format. Predictions ahead of the race reveal that 5 out of 7 people are confident that the GT-R is going to be first across the finish line.

For the first run, they've opted for a 1,000 ft (304 meters) head-to-head battle. The GT-R driver has a much better reaction time, and it simply crushes the Hoonicorn from the get-go. Onlookers claim that the Nissan jumped the start, but either way, it's hard to think that the Ford could've matched its pace. In an attempt to even the odds, Lia Block is going to get a small advantage during the starting procedure.

Seconds later, we get to see a photo finish between these two cars. But the aerial view reveals that the Hoonicorn wins by a small margin. And that means that after two runs, they're tied 1 to 1. It's not over yet, though. The last run of the day is going to determine the winner.

Alas, it was not meant to be for Lia Block. Soon after she launches, it's obvious that something is wrong with her car. All those launches took their toll on the driveshaft, which decided it's time to call it a day. Even though the last run didn't go all the way, the GT-R won fair and square. Until the next episode, Mr. Block and the team now have to get the car running again. 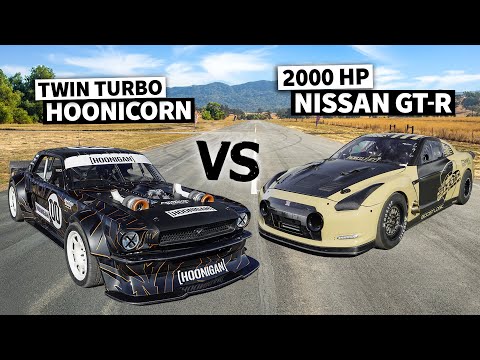