1 Ninja vs Demon: Flagship Dodge Challenger Gives Kawasaki ZX-14R a Reason to Get Worked Up

After a long and successful collaboration with the performance division of the Ford Motor Company, Ken Block is now in cahoots with Volkswagen Group brand Audi. Even though Ken decided to sell many of his beloved Fords, the pro rally driver still owns the ludicrous Hoonicorn Mustang.
10 photos

A 1,400-horsepower thriller with a twin-turbocharged V8 and a six-speed sequential transmission, the all-wheel-driven pony is not for the faint of heart. One of the few people who dare get into the driver’s seat of this incredible machine is Lia Block, the teen daughter of Kenneth Paul Block.

Having raced in the Lucas Off-Road Racing Series when she was merely 11 years old, Lia is more than capable of harnessing the souped-up V8 hiding under the Hoonicorn’s cut-out hood. The question is, can the 14-year-old racer keep a highly modified Ferrari F12berlinetta at bay in a drag race?

Owned by Damon Fryer of Daily Driven Exotics, the one-of-one Fezza is rocking a 6.3-liter V12 with a pair of spinny boys and a straight-piped exhaust system. The grand tourer from Maranello is running VP 110 racing fuel to make 1,000 horsepower at the rear wheels. Emphasis on “rear” because that’s not good enough against Lia Block’s all-wheel-drive car.

The Ferrari also plays second fiddle in terms of curb weight because it reportedly tips the scales at 3,800 pounds (1,724 kilograms) while the Hoonicorn flaunts 2,998 pounds (1,360 kilograms). Finally, the dual-clutch transmission in the F12berlinetta was designed from the start for daily-driving scenarios while the Sadev tranny in the Mustang is a sequential.

On the first run, Lia reacts better and the Hoonicorn claws into the asphalt better. Even with a slight advantage on the second run, the DDE TT F12 simply doesn’t have the legs of that incredible Mustang. So far into the second season of Hoonicorn vs. the World, the 1,400-horsepower brute has lost only once against a drag-prepped Nissan GT-R with 2,000 hp on tap. 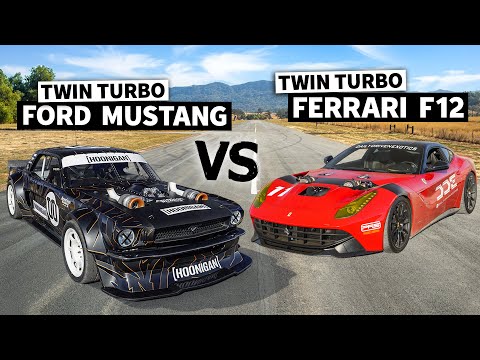