Mircea Panait
Essentially the four-ringed sibling of the Lamborghini Huracan, the Audi R8 was the most powerful car offered by Ingolstadt-based automaker until the introduction of the RS e-tron GT. But still, one cannot deny its corner-carving ability, straight-line performance, and sexy exhaust note.
10 photos

The R8 in the featured video is rocking the same 5.2-liter V10 engine as the Huracan. Rated at 602 horsepower and 413 pound-feet (600 Nm) of torque in this application, the free-breathing lump is connected to a seven-speed S tronic dual-clutch box that channels those resources to all four wheels.

In normal operation, up to 100 percent of the torque is transmitted to the rear wheels. The quattro permanent all-wheel-drive system flaunts an electrohydraulic multi-plate clutch up front instead of a viscous coupling of the first-generation R8. If necessary, the aforementioned multi-plate clutch diverts up to 100 percent of the torque to the front wheels. The mechanical differential lock on the rear axle maximizes traction without any slip.

The question is, can the German supercar hold its own against a 797-horsepower land missile? The Charger SRT Redeye Hellcat Widebody is the culprit, a four-door sedan that channels 707 pound-feet (959 Nm) to the rear wheels with the help of a torque-converter automatic transmission.

You can already guess where this is going, and you’re not wrong. In addition to wheelspin, the Dodge-branded muscle car is a chonky son of a gun that weighs 4,654 pounds (2,111 kilograms) compared to 3,638 pounds (1,650 kilograms) for the four-ringed contender. The R8 makes easy work of the Charger from a dig, much to the disappointment of muscle car enthusiasts, but the four-door Mopar still manages to win a single roll race.

Regardless of which model is more to your liking and which is the more consistent over the quarter mile, both of them face grim futures. The best-case scenario for the R8 would be the hybridized powertrain of the Huracan’s replacement, but nobody is certain what’s exactly cooking behind closed doors. As for the Charger, the platform on which it’s based will be discontinued at the end of 2023 along with the Hellcat engine. 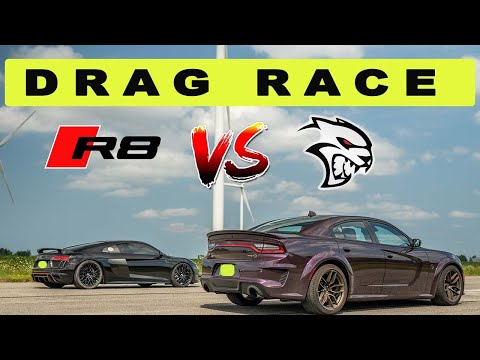