Nissan 240SX, Toyota Supra, and Honda S200. Each of these models could spark erupting volcano levels of passion among JDM aficionados. Now add to the mix that we are dealing with turbocharged drag-racing heroes.
21 photos

Nissan’s S13 and S14 versions of the 240SX series may not be as famous with the general audience as the company’s Z Car lineup or the mighty GT-R. But they sure have a cult following among those who are passionate about drifting or tuning. Hey, as exemplified here by the videographer behind the Drag Racing and Car Stuff channel on YouTube, they’re even cool as hell on the quarter-mile.

Then comes a “black-eyed” Toyota Supra MkIV, a green monster that’s quite easy to identify as Jared Holt’s Real Street Performance Supra. It’s a car famous both at the dragstrip and on TV, as it once appeared in an episode of the National Geographic TV show Street Outlaws.

Last, but certainly not least, we have a Honda S2000, the open-top sports car known for its record-setting specific power output. But here is the deal, this “samurai” has gone the Westerner way, as the little S2000 is allegedly sporting a feisty LS swap of the V8 variety.

Don’t bother asking how they crammed that inside the engine bay. Suffice to say this all-out JDM war is making extensive use of turbocharged forces. So, all three cars have been granted access to the forced-induction wizardry world, and the 240SX even opted for its own swap: a “traditional” 2JZ assembly.

First up are the Nissan 240SX and A80 Supra, with both looking decidedly ready to battle each other into quarter-mile oblivion. The victory was decided fast enough, as the 240SX managed to recoup the initial head start and cross the ET marker in 8.66 seconds. Holt’s Supra tried to give chase and nailed a much higher trap speed, but that still wasn’t enough, considering the 8.87s pass.

Next up, from the 1:09 mark, the Toyota-powered Nissan lined up against the America-flavored Honda S2000. And it turned out the little roadster was more than able for the task at hand. Case in point, flawless victory with an 8.31s run against the 240SX’s improved 8.45s pass. 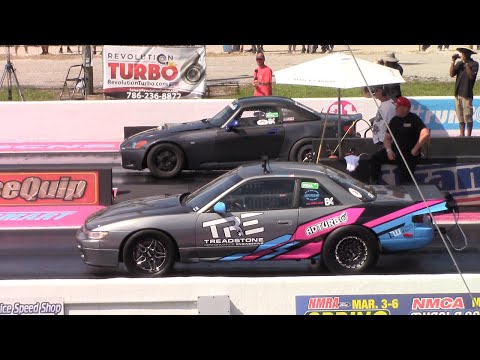