3 Ford Falcon "Super Sprint" Has a Supercharger for Days

5 This 1967 Ford Cortina With a Focus SVT Engine Looks Like a Hoot to Drive
Car video reviews:
Up Next

Are your Hoonigan parts and merch arriving late? It's probably because the van that was supposed to deliver them got involved in some drag racing against the deadly Ford Mustang "Hoonicorn," Ken Block's AWD drift machine.
6 photos

We say it's a drift car, but over the past few weeks, people have learned that the heavily modified classic 'Stang is also excellent at drag racing. So if you add AWD and a twin-turbo 1,400 hp engine to a lightweight car, it goes fast - who knew?

But seriously, Block's toy has taken down many awesome speed demons, ranging from the McLaren Senna to Rob Dahm's 4-rotor RX-7, which makes 1,240 horsepower. So this little truck doesn't stand a chance, but maybe some introductions are in order.

This refrigerator on wheels is dubbed the "Merch Van." It used to be your average 1969 Chevy P10 step van, beaten up and rusty. But after heavy restoration, it's a sharp-looking box with a strong heart. The place of the old 240-ci (3.9-liter) inline-6 has been taken by an LS motor, ticked into producing somewhere around 400-420 horsepower. The B&M Street/Strip 4L80E transmission also proves a source of entertainment during the drag races themselves.

Ken Block's crazy Mustang, on the other hand, started life as a 1965 coupe, though there's not much left of that. Carbon fenders, skirts, bumpers, and more, wrapping tightly around 295-width tires on all corners and a meth-breathing twin-turbo 410-ci (6.7-liter) Roush Yates crate. With pushrod suspension, two high-pressure injectors per cylinder, this basically nothing like a normal Mustang.

Well, we all know the van has no chance of winning, but it's not like drag races are supposed to be educational. So let's see what kind of cheats the Hoonigan guys have to make this an even race. A 500-foot (152-meter) head start isn't enough, so they have Ken Block start backward and do a few spins just to make it interesting. 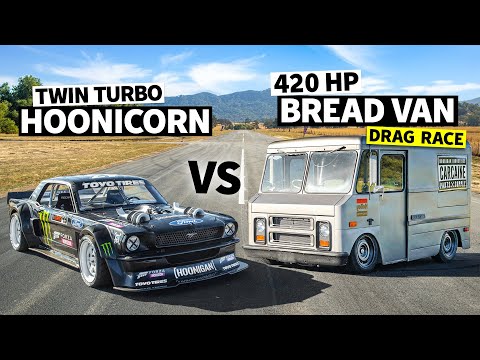