1 Dodge Charger Hellcat Puts the 'B' in 'Bad', Older Corvette Doesn't Give a Damn About It

840-HP Cutlass Looks Fast, Gets Beaten by a Girl

There's a new challenger for the Hoonicorn in town. Time after time, Lia Block gladly gets behind the wheel of her dad's custom-built Ford Mustang to face her opponents. And by the looks of it, she's having quite a bit of fun unleashing the 1,400-hp on the short track used by the team at Hoonigan for these events.
10 photos

At first glance, you'd tend to think that this 1982 Oldsmobile Cutlass isn't going to stand a chance against the mighty Hoonicorn. But one thing's for sure. If the driver was bold enough to bring it out for the race, there's bound to be something hiding under the hood. As soon as you take a closer look, it becomes obvious that this might just be a 10-second car. Just look at those Kirkey seats; why would you install those if your car wasn't fast?

Looking at the specs of both cars, you can't help but think that the Hoonicorn is going to plow through the Cutlass like it was nothing. The twin-turbo V8 on Lia Block's car is capable of developing 1,400 horsepower, while the Procharged LSX on the Cutlass can only churn out 840-whp. With that kind of power, it's a good thing that both cars have AWD to work with. But the Oldsmobile is about 800 lbs (362 kg) heavier.

To make its situation worse, it has a 4L60-E transmission, which isn't going to be as impressive as Block's 6-speed sequential. Some of you may remember the Cutlass from back when it went up against Tanner Foust's drift-spec Passat. It was quite fast back then, but it's got a mountain to climb for this race. Lia Block has probably done more launches in the Hoonicorn than most ordinary people would have in their cars.

And she always seems so determined to win! Pre-race predictions from Hoonigan crew members seem to be pointing at her as well, but let's not jump to conclusions just yet! For the first run, the two cars will be competing down a 1,000-ft (304 meters) stretch of tarmac. It only takes a few seconds for Lia to assume control of the race, and she's going through the gears like there's no tomorrow.

For the second run, we're looking at a 500-ft (152 meters) race format. But it all goes south fast, as the Hoonicorn encounters a technical issue yet again. Considering its performance figures, that doesn't come as a surprise. So it's all down to the final run of the day. Providing the Cutlass with an equal fighting chance means sticking to the 500-ft format.

This isn't the closest drag race you've ever seen, but it's not half bad either. At the end of it all, Lia Block adds one more victory to her name, and we already can't wait to see what her next opponent will be driving. It's hard to believe that anyone with less than 1,000-hp will be able to produce a surprise. But then again, there are more things to be considered before drawing any conclusions. 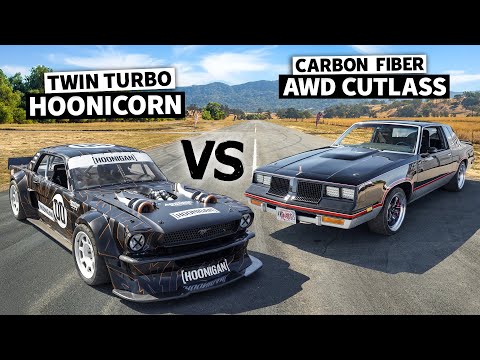