1,400-HP Hoonicorn Gets Challenged by 2JZ RZR, Is Lia Block in Trouble?

You could say that 2021 has been a very good year for the Block family. Not only did Ken sign a contract with Audi, but his daughter also took over the role of driving the Hoonicorn. And she's been doing one hell of a job by winning race after race in that thing. Now, everyone is eager to see Ken's future Electrikhana video.
19 photos

But until that time comes, we've still got more episodes of the "Hoonicorn vs the World" to see. In the most recent outings, 14-year old Lia Block took on a Pikes Peak car and a Tesla Plaid. Talk about some serious competition! But we shouldn't forget that the Hoonicorn isn't just a car with a lot of power. It's a complex package built for speed. And it takes more than 1,000 horsepower to even remotely stand a chance.

For the latest installment of the series, we're looking at a rather odd competitor. I mean, when's the last time you saw a Side-by-side vehicle at the drag strip? The Polaris RZR that showed up for race day against the Hoonicorn is no longer what it used to be. Because its owner thought it would be a good idea to drop in a 1,100-hp 2JZ engine to make it considerably faster. You don't even have to see the engine bay to realize how fast this vehicle is.

Just one glance at the rear tires should be enough. After all, this RZR only weighs in at 2,400 lbs (1,088 kg). It has a 2-speed Power Glide transmission, and it's only RWD, as opposed to the Hoonicorn. Even though it's about 600 lbs (272 kg) lighter than the custom-built Ford, it also has about 300 less horsepower. At this point, it doesn't feel like it will stand a chance going up against Lia Block, at least not on the tarmac.

But then again, those rear tires might be good enough to provide adequate grip levels. According to the RZR's owner, this Jurassic Park-themed beast can go all the way up to 170 mph (273 kph). That's more than double what a stock one can achieve. Also, do you remember ever seeing a side-by-side being capable of doing a standing quarter-mile (402 meters) in just a little over 8 seconds?

Even so, predictions ahead of the race seem to favor Lia Block and the Hoonicorn. Just one of the cast members is betting on the Polaris, and the team at Hoonigan jokingly mentions Nedry and Malcolm in the scene as well. For the first race, the two vehicles will be going head-to-head down a 1,000 ft (304 meters) long piece of tarmac. They're both off to a phenomenal start, and for a second there, you'd think that the Polaris might win the race.

But by the end of it all, Lia Block gets a comfortable win. The Polaris RZR is off to a much better start on the second run, but we shouldn't forget about the aerodynamic factor here. It doesn't take long for the Hoonicorn to re-assert dominance, even though the gap isn't as big as it was before. Seeing that they were going for a best-out-of-3 format, this means that Lia Block wins yet another challenge, which must make her father real proud! 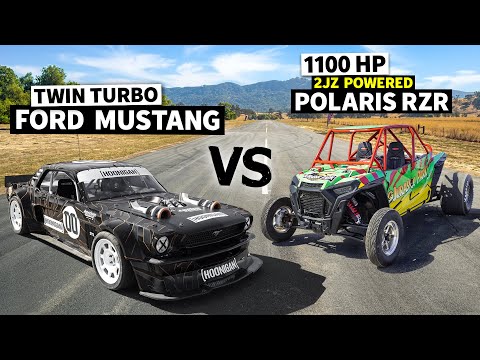