2 List of Cars Most Likely to Get You a Citation for Reckless Driving? The Saturn L200 on It

5 Car Towed In Queensland After Dad Teaches Five-Year-Old How To Do A Burnout
Car video reviews:
Up Next

Home > News > Auto Motorsport
13 Dec 2021, 19:25 UTC ·
by Stephen Rivers
This Honda-powered racecar might not have 1,400-horsepower, but it's somehow even more extreme than the Hoonicorn. Put them together on the same drag strip, and you get some exceptional racing and even better sound effects.
6 photos

Let's take a moment to break down what this little racecar is. In its original form, it was a 2018 Wolfsports GB08 prototype. It's technically a two-seater though only one is installed currently. Behind the driver is a 650-horsepower Honda K20 engine with a BorgWarner 83/70 turbocharger.

It weighs just 1,400-pounds (635kg), and that's with its driver and fluids equipped. Power to weight is always a serious concern in racing. Here at the Hoonigan drag strip, it's vital, too, considering that the Hoonicorn makes more than twice the power.

Of course, it also weighs more than twice as much. Nevertheless, it has something that the Honda can't match, power to all four wheels. That grip helps the Hoonicorn scoot off the line like a scalded rat during the first race. Moreover, the K20 engine needs time to get its turbo spooled up and, despite being fast, loses by 5 or more car lengths.

To make the race more competitive, they settle on making the second race a roll race. Obviously, that changes the game completely. Now, the Wolfsports GB08 gets to be in boost when it leaves the line. It's also the very first time that Lia Block, driver of the Hoonicorn, has ever roll raced.

Those factors come together to see the Wolf take the win but only by a single car length. Lia picks up some experience, though, and asks to set the pace for race three. It's enough to give her just a little edge. Robin Shute, the driver of the GB08 prototype, also misses a shift, and the Hoonicorn rides off into victory.

It's fascinating to see how these two cars attack the same challenges. Clearly, the Hoonicorn was built for fun, but it's great at lots of things. The Honda was built for real racing, and it's a great demonstration of how that can keep up with cars that are much more powerful. 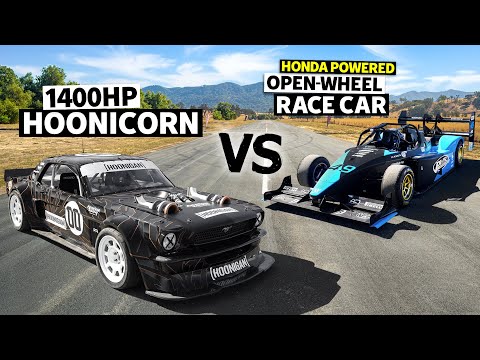