About everyone loves the astonishing mid-engine C8 Chevy Corvette. But if the naturally aspirated tradition continues, we fear that one day its flagship ZR1 version will be deprived of its proud supercharged mill.
28 photos

Think about it for a second. The 2020 C8 Chevy Corvette Stingray arrived at the mid-engine party with an up to 495-horsepower 6.2-liter V8 engine and no forced induction. Then, over in October last year, the 2023 Corvette Z06 surprised everyone with its FPC (flat-plane crankshaft) madness. And also extracted a record-breaking 670 horsepower out of just 5.5 liters of displacement. Again, no forced induction.

Next in line, probably for a 2024 model year release, comes the electrified C8 Corvette E-Ray. Which, as per the rumor mill, will combine the widebody Z06 looks with Stingray’s small-block engine and some form of hybrid assistance. Again, as far as we can tell, no forced induction. See where this is going?

Perhaps, just to be sure of the supercharged glory of your Corvette garage, a C7 ZR1 might be a far wiser choice. At least for now, or until we find out more about the flagship C8 ZR1 version in the not-so-near future. Anyway, here is one 6.2-liter supercharged V8 monster residing all black and proudly in the inventory of Grand Rapids, Michigan-based Garage Kept Motors with a very low mileage count.

The odometer currently reads a mere 10,680 miles, which translates to exactly 17,188 km for the folks that do not agree with the imperial system. Naturally, it has had just one owner to tame the menacing all-black looks. Hey, one could even see it as a member of the murdered-out niche thanks to its OEM triple black combination (body, carbon fiber roof, interior black treatment).

As for other highlights, do we really need more than its pristine looks, Darth Vader-approved paintjob, roaring and whining supercharged V8, and the decidedly low mileage? Perhaps a low pricing quotation might make everyone’s day. Not going to happen, though, as this example goes for no less than $159,900! 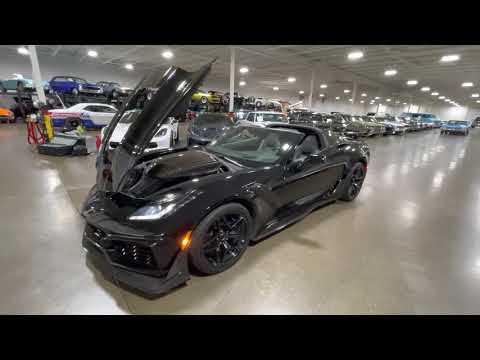