2 Jonathan Viera Lends Lamborghini Huracan to Friend, He Crashes It into a Tree

Cadillac’s high-performance CTS-V series might be gone, but it’s certainly not going to be forgotten any time soon. Not with outlets such as Vengeance Racing building up hype on and around the track.
36 photos

With three generations produced from 2004 through 2019, one should not consider the Cadillac CTS-V scarce. Even thoroughly built ones are not that uncommon. On the other hand, we feel that on this occasion, the videographer behind the Drag Racing and Car Stuff channel on YouTube should have refocused on another ride prepared by Vengeance Racing.

The selected red-beadlock wheels/black 2009 Cadillac CTS-V for this video (embedded below) is by no means a slouch. That is obvious from the very beginning when it dukes it out with a tuned S550 Ford Mustang GT from HPJ Performance and nails a cool 8.05 to 8.68s victory. But then, when it’s time for the presentation, we get to see a second Vengeance Racing treat from the 1:40 mark.

Alongside the feisty turbocharged CTS-V sits a subtle-looking built twin-turbo C7 Chevrolet Corvette Z51. Those twin chutes might provide a hint or two regarding its prowess, though, along with the dual-stacked hood exhausts. And soon enough, everything becomes crystal clear.

While the 2009 Caddy is the focus of this feature, the real star of the show is actually VR’s 2014 C7 Corvette. As the team siblings face each other, the Chevy establishes its supremacy with a 7.61s ET against the CTS-V's good, but not close enough, 7.87s result.

At this point, fans of the channel have noticed this built C7 is clearly an uncommon sight. And the videographer thoroughly agrees, adding further evidence to the assumption this generation might be an underestimated hero platform. As such, the next battle (at 3:45) sees the Corvette go against another CTS-V, this time around nailing an even better result of 7.42s against a rather shameful 10.58s performance! 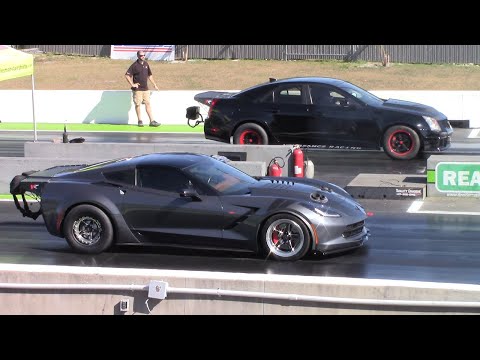