2 How Quick Is Hennessey’s Mammoth Compared to the Stock Ram 1500 TRX?

4 Hellephant Ram TRX Heads to the Hennessey Lab for Testing, Will Become a 6x6

5 Beefed-Up Dodge Durango Hellcat Drag Races Lambo Aventador, Someone Gets Walked
Up Next

Mihnea Radu
The Durango Hellcat is not a performance SUV, it's a company statement from Dodge, something cool for the hardcore buyers to get. And what do all Hellcat people want to do? Mods, of course, like the ones Hennessey Performance just performed.
64 photos

Under the hood of what used to be a normal commuter, Dodge placed the now-famous 6.2-liter supercharged V8 motor, which is allowed to pump out 710 horsepower. With a top speed of about 180 miles per hour, this is already an unbelievably fast vehicle.

But this next video is Hennessey's way of celebrating the launch of its Durango SRT Hellcat HPE1000. As the name suggests, we're dealing with a package. This demonic Durango version boasts a new 2.7-liter supercharger as opposed to the 2.4-liter in the normal mode.

In combination with the stainless steel long-tube headers, and an upgraded pulley and throttle bodies, the HPE1000 makes one hell of a racket. It's already been dyno-tested and put down 1012 horsepower and 969 lb-ft of torque (1314 Nm). That's not quite the 1200 hp we're expecting from the Ram TRX 6x6, but it will have to do.

Amusingly, the thumbnail for the drag race video is titled "How Much Faster?" as if we don't know Hennessey will try to make the gap as big as possible.

So the two SUVs that line up at the start of the race look identical, glossy black machines with equally black wheels. But you quickly realize which one has got the extra 300 horsepower. Right from the beginning of the race, the HP1000 pulls away and is off to a huge lead. That's the power of the supercharger for you, as we doubt a tune on something like a BMW X5 M would have the same effect off the line. 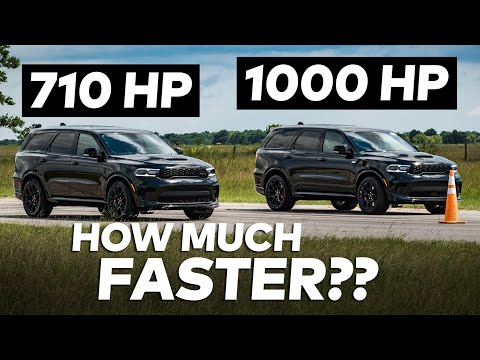