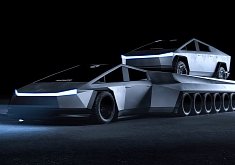 Qoros Model K-EV Presented In Shanghai, Will Get A Production Version in 2019

20 Apr 2017, 13:54 UTC / Qoros has presented a concept vehicle named Model K-EV at the Shanghai Auto Show, and it looks like it is out of this world. Expect a production version in 2019

Qoros K-EV Concept Revealed, It Reminds Us of Tron Legacy In A Good Way

13 Apr 2017, 08:25 UTC / Qoros has published an image of the K-EV Concept, which will be publicly unveiled at the Shanghai Auto Show. It looks futuristic, and we like its design

6 Apr 2017, 16:25 UTC / The Chinese partners of Koenigsegg, Qoros, have teamed up with the Swedish company to build a concept vehicle that portrays an electric supercar

Freevalve Engine - What Is It, And How Will It Change The Car Industry

18 Nov 2016, 17:02 UTC / Freevalve, Koenigsegg's sister company, has developed a camless engine. They have a production version, and it's revolutionary. Here's what you should know

18 Nov 2016, 14:01 UTC / The first passenger vehicle to demonstrate that the camless engine is a functional design is [wait for it] a Chinese hatchback

19 May 2016, 14:31 UTC / According to a recent interview, Koenigsegg is planning the development of a 400 HP engine that only has four cylinders and a 1.6-liter displacement

27 Apr 2016, 14:26 UTC / Qoros, a Chinese automaker that set up shop four years after Tesla Motors did, is ready to challenge the electric vehicle market with the 3 Q•LECTRIQ

27 Apr 2016, 14:14 UTC / Koenigsegg technology has been showcased on a Chinese vehicle. We are talking about FreeValve, a camless internal combustion engine, the first of its kind

9 Jun 2015, 08:21 UTC / The company sells three versions of the same model, the Qoros 3, but presented a plug-in hybird SUV concept that showed promise

20 Apr 2015, 13:11 UTC / This subcompact crossover concept proposes a plug-in hybrid powertrain. Everything is wrapped in a rather attractive package

Qoros 3 City SUV Teased, to Debut at the Guangzhou Auto Show in November

11 Nov 2014, 14:56 UTC / If you’re not familiar with Qoros, this is a Chinese-Israeli automaker established in 2007. Although the brand has a long way to go in terms of recognition and worldwide dealership network, Qo...