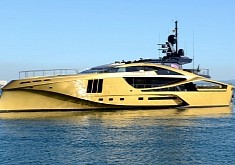 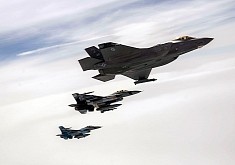 F-35 Joins Two F-16s to Feed Over Alaska, They Make for the Perfect Screensaver Shot

RAF Stepping Up Its Defense Game Against Rogue Drones

22 Jun 2022, 02:33 UTC / The future of air combat is all about drones working together with piloted aircraft - this was the goal of a recent flight test organized in Finland

11 May 2022, 05:40 UTC / Israel Aerospace Industries and 2Excel Aviation conduced a successful demonstration of the Maritime Heron drone for the UK government

6 May 2022, 03:53 UTC / Unmanned aerial vehicles have become so important for Air Forces around the world, that Israel chose to fly them next to fighter jets on its Independence Day

28 Mar 2022, 03:42 UTC / Eurodrone is gearing up to become a top-level military unmanned aircraft, powered by a game-changing engine called the Catalyst

The U.S. Military to Start Testing a Disposable Cargo Drone for High-Risk Operations

27 Jan 2022, 09:28 UTC / After several delays and obstacles, the Eurodrone is finally back on track, ready to kick off production of the new-generation unmanned aircraft

15 Dec 2021, 05:59 UTC / The Russian fifth-generation fighter jets will be able to coordinate the attacks of four of these deadly new drones at the time time

1 Nov 2021, 07:51 UTC / An innovative thermal system will turn this tactical UAS into the first one capable of conducting year-round operations in icy environments

In a Historic First, an Autonomous Military Ship Fires Missile in Coordination With Drones

15 Oct 2021, 05:02 UTC / It's no longer something that could happen only in movies: Royal Navy's autonomous ship proved its lethal capabilities together with autonomous aerial vehicles

6 Oct 2021, 06:26 UTC / Boeing's subsidiary Insitu is the creator of one of the best military UAS for ISR operations, now to be fitted with the industry's first multifunction radar.

30 Sep 2021, 04:56 UTC / The Royal Navy's HMS Lancaster looked fierce as it launched the fighter jet-like Banshee drones from its deck, for the first time, with big plans for the future

10 Sep 2021, 07:24 UTC / This revolutionary unmanned aircraft is a drone and a satellite in one, with unmatched flight endurance and telecommunication capabilities.

7 Aug 2021, 09:27 UTC / The Grand Forks Air Force Base reported that a RQ-4 Global Hawk suffered a crash yesterday in North Dakota and caught on fire - the causes are still unknown

30 Jul 2021, 08:11 UTC / MQ-4C Triton is being modernized with something called Integrated Functional Capability (IFC)-4, first flight with these upgrades conducted this week