The U.S. Military to Start Testing a Disposable Cargo Drone for High-Risk Operations

Most of us would only associate cargo drones with things like DHL deliveries, but the military versions play an essential role that can even help save lives. The U.S. Department of Defense (DoD) is betting on autonomous, electrically-powered aerial vehicles like the Silent Arrow, which can deliver essential goods in highly-contested environments.
7 photos

Yates Electrospace Corporation, operating under the name of Silent Arrow, was founded in 2012, and its autonomous cargo drone has received significant attention since its launch, including becoming a finalist for the Robert J. Collier Trophy as the "Greatest Achievement in Aeronautics or Astronautics in America," in 2021.

The company was also awarded a Warfighter Lab Incentive Fund (WLIF) contract by the DoD, worth $2.2. million. Over a 12-month period, the company’s flagship product, the GD-2000, will participate in a demonstration for the U.S. military. Two of the UAS (unmanned aircraft systems) will be delivered to Exercise Emerald Warrior at Hurlburt Field, two will be delivered to an undisclosed location for other demonstrations, and one will be used for non-flying purposes, including training.

This autonomous guided delivery vehicle is also disposable, and it can be easily transported to any theater of operations, thanks to its special design that allows the spring-loaded wingspan (28 feet/8.5 meters) to fit inside the fuselage (8 feet/2.4 meters). The compact, tandem-wing vehicle can also be deployed from different types of aircraft, including via a helicopter sling. There’s also an electric, reusable version available (the ER-Series).

The GD-2000 has a gross weight of 2,000 lbs (907 kg), and a speed of 62 knots (71 mph/115 kph) at 1,000 lbs (453 kg). It also claims a landing accuracy of 100 meters (328 feet). Due to the fact that it can be deployed without any additional risks for human operators, it’s an adequate choice for logistics operations in emergency scenarios, such as wildfires, hostage situations, or highly-contested combat environments.

Through the completion of this DoD contract, the Silent Arrow cargo drone will confirm its compatibility with Joint All Domain Command and Control (JADC2) systems and military aircraft. 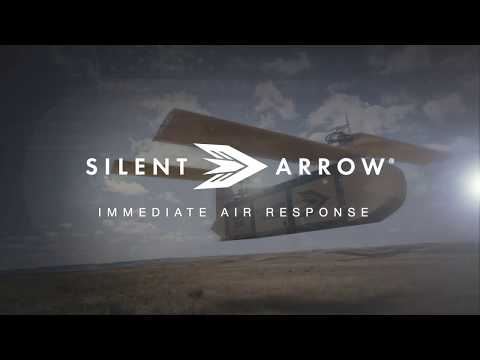