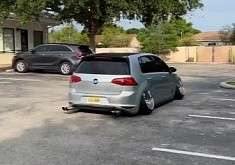 Nothing Can Distract Mr. McDreamy From His Racing. Well, Maybe a Leaf Blower Can

20 Dec 2021, 11:16 UTC / Christmas parties are not everyone's cup of tea, and Christoph Waltz is one of those who is not big on them. Watch him trying to avoid one thrown by BMW's CEO

New Sitcom Tackles the Workplace Life of a Vehicle Manufacturer, It Is Set in Detroit

Rugged Stallone Rides a Bike on the Set of The Expendables, Fans' Excitement Grows

3 Aug 2021, 07:13 UTC / Better hurry because it's only available for a limited time on the “MotorTrend Channel” on YouTube. Afterward, it's all about the money... and the app

22 Jun 2021, 13:38 UTC / Actor and comedian Jamie Foxx showed off his latest aquisition. He already took his new Carmel GT roadster on a trip on the streets of California

13 May 2019, 15:05 UTC / “I’m the worst driver in the world,” actress says she thought when Denzel told her to park his Porsche, which she’d never driven before

GoT Actor Liam Cunningham Tries Out the Lamborghini Huracan Performante

6 Aug 2018, 18:33 UTC / On a short trip to Italy, the Onion Knight decided that the time is high to check out the Huracan Performante. In Tuscany, nonetheless

Fast9, The Next Sequel In The Fast And Furious Franchise, Already Has a Poster

24 Apr 2017, 13:26 UTC / An image uploaded by actor Tyrese Gibson on his Instagram account has made it around the world. It is the photo of the cover of Fast9, the next Fast&Furious

20 Jun 2016, 15:04 UTC / It saddens us to report that Anton Yelchin might have died because of the confusing shifter in his 2015 Jeep Grand Cherokee

20 Jan 2016, 09:09 UTC / The actor from Django Unchained, Jamie Foxx, saved a man from a burning truck outside his home in Los Angeles, just seconds before the car blew up

Dwayne "The Rock" Johnson Keeps Getting Supercar Gifts, but He Can’t Drive Them

23 Nov 2015, 10:05 UTC / Dwayne "The Rock" Johnson is currently busy with HBO's Ballers series. As both an actor and producer, he keeps receiving supercars

23 Nov 2015, 09:34 UTC / Charlie Sheen is one of the old friends of Fiat, as they have been working together several times. But ever since the HIV scandal, this may change

Porsche: It’s Paul Walker's Fault He Died in the Accident

17 Nov 2015, 09:30 UTC / It's been almost two years since Paul Walker passed away in a fiery car accident. His daugther has decided to sue Porsche, but the company says it's innocent

13 Nov 2015, 15:10 UTC / Steve McQueen was not just passionate about racecar driving, he also wanted the world to know more about it. This documentary is about that

6 Nov 2015, 09:12 UTC / Many great comedians are said to be quite sad in their personal lives, often claiming they have no identity outside the roles they play

5 Nov 2015, 15:04 UTC / Nicolas Cage seemed more like a muscle car driver, since he played the leading character in Gone in 60 Seconds, but it turns out he also enjoys modern Ferraris

13 Oct 2015, 15:42 UTC / Most of the rappers out there love cars, and usually buy the most expensive in the line. Ludacris still cares for his older Acura

13 Oct 2015, 11:23 UTC / Dwayne "The Rock" Johnson is FoMoCo's new hero, as the actor is currently involved in a commercial campaign that sees him as leader of a Ford mechanic team