2 The Fabulous Flamingo RV Is the Love Child of a War Aircraft and a Truck, All American

4 Tuck Bike Is the World’s First Bike With Folding Wheels, Compact as a Suitcase

As the saying goes, just because you can doesn’t mean you should. Pursuers of the finer things in life, and especially believers that everything-gold is the perfect way to show worth, status and style, need not apply, though.

For them, there are always designers like Hugh Power and his House of Solid Gold, to deliver exactly what they’re looking for. That would be everyday objects either made of solid gold or plated with the precious metal, from dice to sipping straws and toothpicks (Snoop Dogg had one commissioned), to reading glasses and footballs, and even a fat tire bike. It’s only that last item on the list that interests us, as it is, to this very day, the world’s most expensive bicycle.

It’s commonly known as the Gold Fat Bike, but the full name is the Beverly Hills Edition 24K Gold Extreme Mountain Bike. Phew. It is the creation of the aforementioned Power and his Beverly Hills-based jewelry design studio House of Solid Gold. The bicycle was actually introduced in late 2013 to great fanfare and rode several newscycles well into 2015.

Power’s plan was, first and foremost, to find a buyer for what he so-aptly described as “a humongous piece of jewelry.” The same plan also included 12 more similar bikes, as part of a 13-item limited series that would find very rich and very eccentric owners. You see, the bike was estimated at $1 million, and Power promised he would donate more than 80% of all the money raised to charity.

As a side note, this is the heart of showbiz we’re talking about. “Charity” means a different thing here: the donations would have gone to non-profit The Way to Happiness Foundation International, which claims to work toward halting moral decay by spreading the word of the Church of Scientology, a widely disputed organization.

The Gold Fat Bike stood out – and continues to do so – from other gold or gold-plated objects by the fact that every bit of it was covered in it. Everything from the wheels to the crank, the pedals and the brake rotors was plated in pure 24K gold and certified. What was not gold on the bike was other premium materials, like alligator leather on the seat, stingray skin on the water bottle, and fine Italian red leather accents in the rims.

What was neither gold nor leather on the bike was precious stones. Power created a House of Solid Gold logo for the bike out of 600 black diamonds (weighing 6.0 carats in total) and 500 golden sapphires (totaling 4.5 carats), which represented an outstanding piece of jewelry in itself. Further customization was added by means of a signature piece of 24K gold at the back of the headtube, with the signature of the artist.

The bike was created with input from extreme Alaska race Iditabike founder Dan Bull, and Sukeun Chun of Veloworx, and took no less than 750 hours to build. Much fuss was made about how every component had been electroplated in the United States, and how, despite all the gold on it, the fat bike was still functional and still able to be ridden hard. If you dared take it on an extreme ride after paying $1 million for it, that is. If you didn’t, you could always use it as a showpiece, so it came with a matching gold-plated stand for display purposes.

Proving the accuracy of the saying mentioned in the first paragraph, despite the hubbub around the bike, it never sold. Power passed away in 2015 and his son inherited what had become his father’s biggest and flashiest (and most expensive) gold creation.

Chances are the Gold Fat Bike exists to this day, and it retains the dubious distinction of being the world’s most expensive. It emerged at auction again in late 2020 when, according to Pink Bike, it was donated to charity and re-listed for $1 million. Benefits should have gone to the Institute for Education, Research, and Scholarships (IFERS) and the Personnel Efficiency Foundation (PEF), but there’s no word on whether it sold or not.

Power was convinced that if you make something out of gold, a buyer will appear, no matter how expensive that thing was. “There's so much money out there and they're looking for places to spend it,” he once said. “You'll always remember who gave you the gifts of gold.”

As it turns out, gifts of gold may be memorable, but not always desirable. 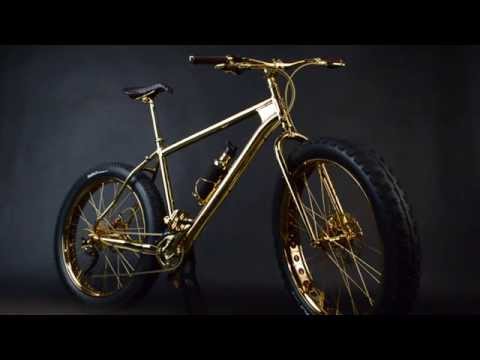