5 Xiaomi HiMo H1 e-Bike Is the Tiniest, Most Portable EV
Car video reviews:
Up Next

Can you really reinvent the wheel? Perhaps more importantly, should you do that even if you could? Engineer Alex Animashaun could and did, and it was all with the ultimate goal of delivering the perfect city bike that you can fold down to the size of a weekend bag for easy transport and storage.

Tuck Bike Is the World’s First Bike With Folding Wheels, Compact as a Suitcase

Foldable bikes are not a novelty: even e-bikes have evolved to have collapsible frames that make them a more suitable choice for apartment dwellers with little to no space to store a bicycle. But this one, called the Tuck Bike, is different in that it folds from the handlebar and frame like all the others and has folding wheels as well. That’s why Animashaun calls it the world’s first bicycle with folding wheels, a claim that’s probably accurate, albeit difficult to prove.

Animashaun has experience in manufacturing and automotive engineering. His resume includes working on the hybrid Range Rover and the Jaguar from Spectre, he says, as well as the title of lead designer with Mobius Motors, and an already established working relationship with suppliers in Asia. He has the know-how and the connections to bring the Tuck Bike to market, so he’s turning to crowdfunding to actually do it.

The Tuck Bike first became real in 2017, and it’s seen several iterations over the years. The final design, which will become the production version, is a slightly updated version of the one introduced in March 2020. You can see both in the videos at the bottom of the page, along with a brief demonstration on how this proprietary, patent-pending wheel folds.
Tuck Bike has three folding modes, depending on how small you want it to become. The least impressive one is Curtsy mode, in which you can only collapse the handlebars for temporary storage in narrow spaces, like in a hallway. The second one is the Quickie, which takes just five seconds, and implies folding the frame in half as well, bringing the wheels side by side. This one is ideal for when you have to take the bike with you on public transport, and you want it to occupy as little space as possible. When folded this way, the bike rolls on its own wheels, so you don’t have to do any lifting of any kind.

So far, this is nothing the world hasn’t seen in other foldable bikes, though Animashaun notes that the Tuck Bike is better than those because it rolls on bigger wheels. He designed it with 28” wheels because he wanted something that was still “fun” to ride around, and he does have a point: most folding bikes have small wheels, which make them more practical than fun.

The third mode is the Full Monty (gotta appreciate the British humor), which brings the Tuck Bike down to the dimensions of a suitcase: 26 x 16 x 34 inches (65 x 40 x 86 cm), to be more precise, or compact enough to fit under your desk, under the table at a bar, or inside your own home, “hiding in plain sight.” This is possible by folding both wheels as well, with each unit collapsing in three sections that stack together and then tuck inside the frame. Animashaun compares the wheel to a pizza pie pre-cut into three slices, which you can then rearrange.

“We reinforced the rim at the ends and hold them together with wedge clamps, so the joints are actually the strongest part of the wheel,” he explains. “Each third of a wheel is independently strong and true and when assembled together, they’re even stronger. There's a final clamp at the hub, and you need at least three clamps to open before any segment can fold. The foam tires mean you can fold and unfold the wheel without having to deflate or inflate.”

The bike rides on custom-made Gecko Rubber airless tires, so that you won’t ever have to worry about flats. The frame is made of aluminum alloy, so it’s light (30 pounds / 13.6 kg) and durable. The single-speed bike features Tektro mechanical disc brakes and integrated caster wheels, which allow you to roll it when the actual wheels are folded and tucked in.

One of the biggest concerns with foldable bikes is the durability of a product with hinges, and you’re probably wondering how durable a wheel sectioned in three can be. Animashaun says riders have no reason to worry: the foldable wheel has undergone comprehensive testing with a third party, and meets the international standard for reliability (ISO 4210-7:2014) and the American Consumer standard (CPSC 16 CFR 1512.18 (j)).

The Tuck Bike is offered in two frame sizes, medium and large. Early backers can get it for $1,695, with deliveries scheduled for October 2022. MRSP will be $1,995, when and if it reaches production. 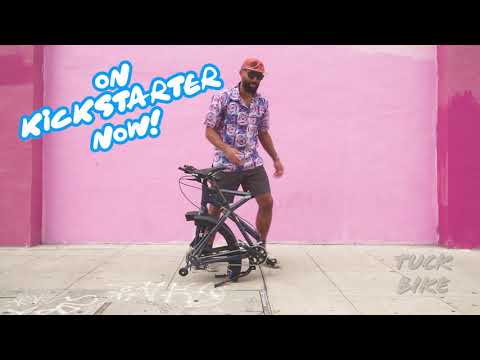 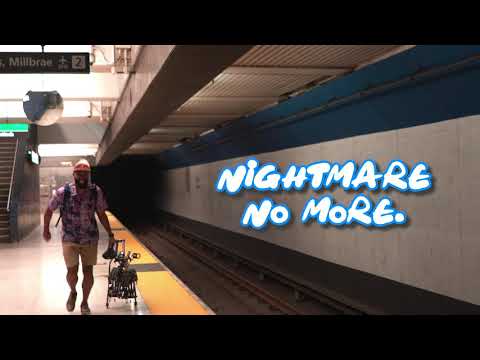