5 One-Millionth Mazda MX-5 Heads Back Home Bearing The Signatures Of 10,000 Fans
Car video reviews:
Up Next

We spent a somewhat unforgettable couple of days with the MX-5 RF, and we wish the Aimgain body kit were applied to that. But this regular-roofed model still looks like a combination between a drift car and Cup racer.
5 photos

The showcase video seems to come China or... maybe Taiwan, we think. It talks about the Aimgain GT kit being popular over in Japan, though this is only the second car we've ever seen tuned in this way.

White is a trending color, and it makes the flared body stand out even more. Fortunately, those polished alloy wheels won't be rubbing on the body because Airrex suspension has also been installed.

Just like the Rocket Bunnies, this package consists of plastic inserts that bolt straight onto the existing bodywork. However, some cutting is obviously required to make much bigger wheels fit. We find it kind of interesting that the rivets used in the fender bonding are also titanium-colored, just like the wheel bolts. Also, there's a heat-blue exhaust with two tips in the middle of the car, flanked by an air diffuser.

This particular vehicle was fitted with a vented hood, which would be nice were it not for the fact that the 2.0-liter engine doesn't have any cooling problems. The owner also wanted a swan-neck trunk wing which you almost never see on American or European tuning projects. (doesn't work with a Hellcat or GTI, does it?)

Carbon fiber door mirrors might be just for show, but so is the rest of this car. As for the trunk, it's mostly been taken up by the air suspension pump and reservoir. But those are much smaller than the ones we usually see installed. When the Miata hunkers down, there's quite a bit of negative camber involved. And that, my friends, is what it's all about. 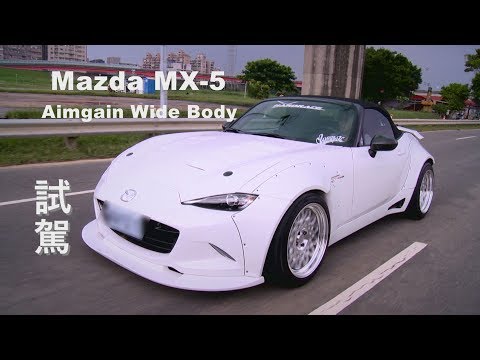