1 This Cold War Jeep Packed Mean Horsepower in Its Comms Array, but Not Under the Hood

Jeeps are always better when they're customized. That actually makes the AMW JTR 1000 from America's Most Wanted even more shocking. Only a tiny Hellephant badge on the side really tells you what it's all about.

We Ride in the First 1,000-Horsepower Jeep Gladiator From America's Most Wanted 4x4

It's a very subtle nod to the massive 1,000-horsepower Mopar Hellephant crate engine the powers it. That's ok though because the speed of this Jeep is intended to fly under the radar just a bit. That's one reason that it's painted in Undercover Green. And that color continues everywhere, even onto the rock guards.
Lending to that undercover spirit, there's not a single instance of the number 1,000 anywhere on the exterior. There are two hidden Hellephant badges though. Look deep into the eyes...er... headlights of this monster and you'll find two more Hellephants etched into the HID lenses.

As we opened the doors of the AMW 1000, two running boards popped down to make for easier entry. I'm a tall guy but considering this rig uses 40-inch tires on top of a lift kit, those boards were a welcome sight. That level of detail continued once we were on board.

Before nestling into the premium luxury upholstery note the subtle but excellent "AMW 1000" that's been embossed on the leather. It's a high-quality touch that sets this Jeep apart all on its own. There are other subtle reminders of how special it is elsewhere too.

The badge across the passenger side of the dash features the companies name. Then on the gear lever, a special custom top piece sits to pay tribute to its creators. Of course, it's when that lever gets moved into drive when the experience gets really special.


As our driver, Jake Bieling of AMW 4x4 drove us to the filming area he romped on it once or twice. "Cool, it's a quick jeep" I quietly thought to myself... It would soon be clear that he used about 30% throttle during those quick little spurts.

Once we found free and clear roads, Bieling stomped on the go pedal and this Jeep went. For those that have heard the lovely supercharger whine of the Hellcat or the Demon, this sounds similar. It's higher-pitched though and considerably louder.

The way it delivers power is simply amazing. Despite weighing in at roughly half the weight of the actual moon, the AMW 1000 pulls hard enough to rival the world's supercars in a straight line.

The eight-speed transmission is pulled straight from the Jeep Cherokee Trackhawk and it snaps off shifts with ease. Watch the video below for on-board footage of the noise and the view from inside and outside of the AMW 1000.

To put that power down, Jake rightly pointed out how the tires on this Gladiator are very special. They're Maxxis RAZR mud-terrain tires and they have a great balance of on and off-road ability.

On-road they grip incredibly well. In fact, while the speed of this Gladiator is clearly its most verbose party trick, it's the handling and braking that really shocked us. Fitted with custom Falcon shocks and a bevy of upgraded aftermarket suspension parts, the AMW 1000 feels unlike any Jeep we've ever experienced.

It's somehow composed, capable, and planted despite being taller, stronger, and heavier than a stock Gladiator. Sincerely, it's the most nimble and impressive Jeep we've ever experienced when it comes to handling.

The amount of time and energy that went into the entire build tells a story by itself. America's Most Wanted didn't just slap a Hellephant engine under the hood and send their customer on their way. Every little facet of the design and build is considered.

This truck has what AMW calls the 8-lug package, which features a much tougher driveline from front to back. It gets a Dana 60 axle up front and a Dana 80 axle out back. The braking package is similar to what's found on a RAM 3500 or 4500. That's the kind of attention that AMW is putting into its products.

We can't thank them enough for the ride along and we hope someday soon we'll get the chance to get behind the wheel ourselves. 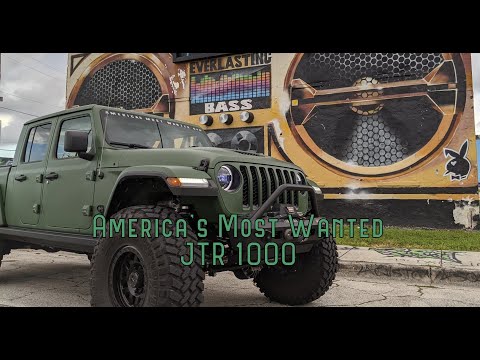