In stock form, you’d be hard-pressed to find a couple of faster people haulers. But the wonderful thing about the Jeep Grand Cherokee Trackhawk and Dodge Durango SRT Hellcat is they share the same 6.2-liter Hellcat-sourced HEMI V8 engine soul.
15 photos

And can anyone imagine that FCA – then Stellantis – had easy-going family meetings with so many models disputing their supremacy? A reunion involving owners of Charger, Challenger, Ram TRX, Trackhawk, and Durango SRT Hellcat probably would see sparks flying quicker than anyone can say Mopar.

Now, just to show that owning the fastest and most powerful stock SUVs on the market is never enough, here’s a couple of races between a husband and his wife. A “grudge” encounter, of course, that will see them pit not only the machines against each other but also test the skill and racing experience of their drivers.

This is because – as thoroughly explained by the videographer behind the Race Your Ride account on YouTube in the description – we are dealing with both bracket racing and traditional heads-up runs. In case you’re new to the dragstrip game and its quirks and features, this is a particularly good explanation as to why the lady of the household nailed the victory during the first encounter.

One can check out the action from the 0:22 mark, and boy did we get impressed by her Durango and the skills needed to do an almost perfect anticipated elapsed time pass (the target was 11.56s, her run was 11.57s). Afterward, from the one-minute mark, they go back to the good old-fashioned heads-up format.

This is where the (probably subtly tuned) Trackhawk has the upper hand, with the hubby taking vengeance on his prior defeat with a 10.76s elapsed time against his significant other’s 11.59s result. Now, all we really needed was a roll race to complete the dragstrip trifecta and see who gets the final bragging rights, but I guess that we will have to wait for another (race) day... 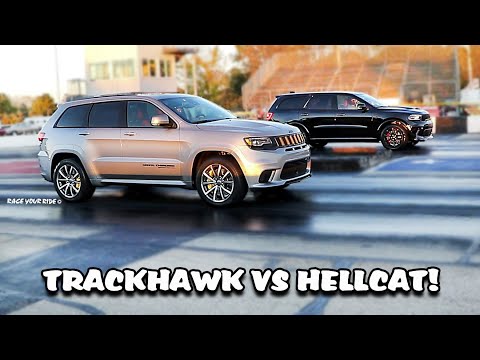