Aurel Niculescu
As far as quarter-mile Mopar aficionados are concerned, is there another dragstrip more fitting than Colorado’s Bandimere Speedway – aka Thunder Mountain? Yep, we didn’t think so either.
25 photos

Located near Morrison and Lakewood in Colorado, the NHRA facility with a seating capacity of 23,500 was inaugurated back in 1958 and is home to NHRA's Dodge/SRT Mile-High Nationals. Courtesy of the videographer behind the Wheels account on YouTube, the dragstrip, also known as Thunder Mountain, keeps its Mopar reputation intact during the latest video (embedded below).

According to the description, a new Dodge Charger SRT Hellcat Widebody is the focus of these encounters, dressed up in a brown paintjob that would make any Root Beer aficionado swell with joy. People also quickly noticed the color makes every single line on the Charger shine pristine. But, of course, we are not here just to admire the cool looks of this four-door Mopar.

Instead, the widebody Dodge was present at the dragstrip to prove its stock mettle, first against a Jeep Trackhawk and secondly against its Challenger sibling. The initial skirmish saw the all-wheel-drive SUV – once the most powerful in the world before the arrival of the Durango SRT Hellcat – shoot off like a rocket over the first 60 yards.

But that didn’t prove enough, as the Charger slowly – and steadily – caught up with the hulking SUV. In the end, the ETs showed a small but measurable difference: 12.21s for the Dodge and 12.47s for the Jeep. Next up, from the 1:15 mark, came the second challenger (pun intended), and this time the roles were reversed.

As such, the Charger Widebody proved to be the one in a hurry this time around, as it actually jumped the start. It was a futile attempt anyway, as the Challenger proved victorious as far as the ETs were concerned as well, nailing a 12.07s victory against its fellow Dodge’s 12.44s result. Good, another Mopar case closed... 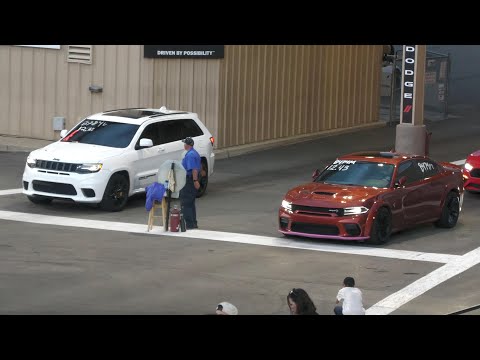