While Jeep built the Grand Wagoneer for up to eight people and impressive comfort and luxury, the Wagoneer was more of a luxurious family SUV or executive car.

Stellantis built the Wagoneer and Grand Wagoneer duo to match, and exceed, the offer from Lincoln Navigator and Cadillac Escalade. It was the most luxurious vehicle ever made by Jeep, and to do that, it started from a blank sheet of paper. The chassis, with its independent air suspension in four corners, and the bodywork were brand new.

Its front fascia was almost like a flat wall with the seven-slats grille above the fat bumper. Its LED headlights incorporated the turn-signals at the top while the daytime running lights and the fog-lights found their way at the bottom of the bumper, above the fixed, exposed, tow-hooks. From its sides, the Wagoneer showed slightly curved, almost vertical panels. The carmaker installed slim LED strips for the taillights and a wide, tall tailgate.

Like its bigger brother, the Wagoneer showed three trim levels, named simply 1, 2, or 3. For the driver, Jeep installed a TFT display in the instrument cluster and, depending on the trim level, one or more touch-screens on the center stack. Between the front leather-wrapped seats, there was a wide center console, which could incorporate a safe deposit box. The middle row was available with either a bench for three or captain seats with or without a center armrest. Even the third row, which was fit for three, could host three full-grown adults.

Jeep installed a 5.7-liter Hemi V-8 engine paired with an eight-speed automatic transmission and a high and low gear transfer case. The adaptive air suspension could increase the ground clearance according to one of the four settings selected by the driver. Last but not least, it could tow up to 10,000 lbs (4,535 kg). 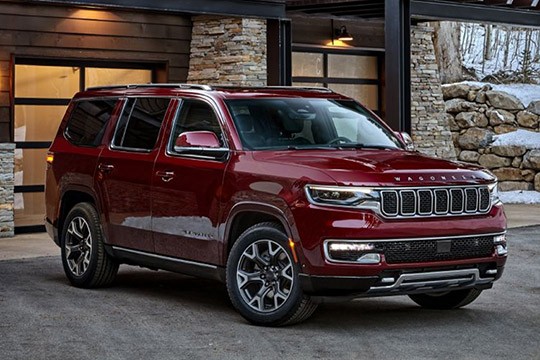