Home > News > U-turn
Vlad Mitrache
The Honda Civic Type R was never the best-sold hot hatch, but that didn't keep it from building one of the strongest fanbases out there—and by "strong" we mean "fanatical".
7 photos

Say something bad about the Type R to the wrong person, and you'll likely end up with an enemy for life. At best. Those who love this model do so with a passion, and there's not a lot they'll hold back from when it comes to defending its honor against those who dare to tarnish it.

Watch this clip, and you can tell Matt, the host, is well aware of this. It's also painfully obvious he's not a fan of this Type R generation's exterior design. The Japanese brand went a little over the top with the embellishments, to the point where if all carmakers did the same, the tuning industry would go bankrupt.

Good luck finding a spot on the hot Honda Civic's body to rest your eyes on; there's not one inch where something exceedingly sharp doesn't stick out in a clear attempt to gouge your eyes out. That would be for the best, if we're honest, because then you wouldn't have to look at it.

However, the worst thing about this race, at least as far as Honda Civic Type R fans are concerned, is that their favorite has absolutely no chance of winning. In fact, if it somehow managed not to make a fool of itself, it should count itself lucky.

That's because the Type R features two of the worst things a car can have in a drag race: front-wheel-drive and a manual transmission. Its rival, the Volkswagen Golf R, comes with both an all-wheel-drive system and a seven-speed dual-clutch automatic, making it better equipped (not to mention stupid-proof) for a quarter-mile drag race.

Other than that, the specs of the two cars are scaringly similar. They both have four-cylinder two-liter turbocharged engines that make 316 hp (320 PS) with only a slight 15 lb-ft (20 Nm) torque advantage for the German hot hatch that should be canceled by the extra weight anyway, given the Type R is over 330 lbs (150 kg) lighter.

However, it could have weighed even twice as less, and it still wouldn't have mattered, at least not in the standing start race. With the Volkswagen Golf R able to use launch control, the Honda found it difficult to set off efficiently even with a professional racing driver behind the wheel.

Check the video below to see what had to be done to hand the Type R the win, and even then by the tiniest of margins in the standing quarter-mile race, as well as how it fared in the rolling race and the brake test. 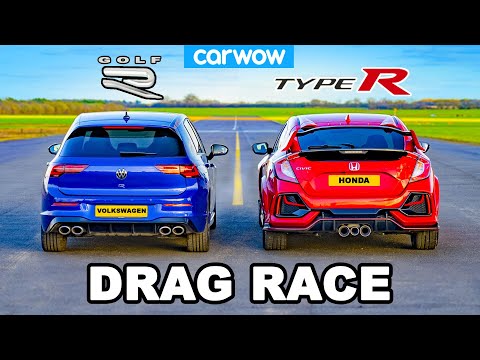