3 $50k Nissan Z Performance Drags Supra 3.0 and Mach 1, Turns Out Slower Than Both

Masterminded by former BMW M boss Albert Biermann, the Genesis G70 is a premium-oriented sedan with sporty credentials. The range-topping specification combines all-wheel drive with an eight-speed automatic transmission and a twin-turbocharged V6 all-aluminum engine that puts out a very respectable 365 horsepower and 376 pound-feet (510 Nm).
13 photos

The 2021 model in the featured clip isn’t your typical G70, though. Starting with the stripped-out interior, this car screams aftermarket with the help of Velossa Tech intake snorkels hidden behind the front grille. Illuminated for extra visual drama, those snorkels feed a six-cylinder lump with Burger Motorsports piggyback tune stacked on top of an LAP3 tune. Capable of running the quarter-mile in 11-odd seconds, this white-painted sedan drinks E70 to the tune of 500 wheel horsepower and 580 wheel torque (786 Nm).

Fitted with Falken Azenis RT660 rubber boots mounted on 18-inch lightweight wheels from Motegi Racing, the Genesis also rocks a transmission tune, a transmission cooler, and a rear diff brace that reduces the movement and slop in the differential’s bushings. Not bad at all for a BMW 3er alternative, huh?

On the other side of the runway, a first-generation Silverado is much obliged to give the G70 a run for its money. Equipped with a Thompson Motorsports 370 augmented by a thumpin’ great snail, the light-duty truck is a rear-wheel-drive affair that produces in the ballpark of 850 horsepower. Texas Speed & Performance Precision Race Components cylinder heads, an intake manifold from Holley, and a Triple P 4L80E also need to be mentioned, along with a passenger-seat delete as well as 315-section street radials. Approximately 300 pounds heavier than the Genesis, the single-cab pickup understandably launches a bit slower off the line in the first (and only dig) of four races.

The Silverado closes the gap to the G70 in the ensuing roll race but fails to assert dominance. With a one-car advantage at the start, the following roll race over 1,000 feet (approximately 305 meters) concludes with a Chevy victory. The final sprint is yet another Chevy victory, making this a 2-2. 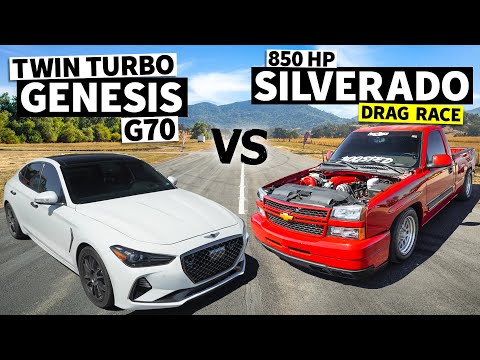