5 C7 Chevy Corvette ZR1 Drags R35 Nissan GT-R, Grudge Race Is As Close As It Gets
Car video reviews:
Up Next

Fiat 500 Hydrofoil Needs No License to Drive, Looks Like a Mutant Mini Car for the Water

Although Ford’s Mustang is responsible for setting up the pony car field, which is a step down from the muscle car sector, that doesn’t mean it’s not a hulking machine. Especially when modified.
11 photos

Irrespective of the generation, Blue Oval’s ‘Stang has always been a respectable quarter-mile adversary. Add into account the countless aftermarket mods and one should easily understand the legend surrounding its racing exploits. Now, the GM and Mopar crowd would love to disagree.

But, frankly, all three of them have outstanding nameplates that are prone to delivering epic builds. Of course, the import competition is extraordinarily strong, as well. And we have seen just about everything trying to beat Mustangs, Camaros, Corvettes, Chargers, or Challengers, among others. Save for a teeny tiny Mazda MX-5 Miata. Well, better scratch that off the bucket/horror list after this one!

The great videographer behind the Drag Racing and Car Stuff account on YouTube has caught (video embedded below) another wild encounter that recently took place at FL2K 2021 (Bradenton Motorsport Park in Bradenton, Florida between October 7th and 10th). There, a green Miata - nicknamed “Turtle” - showed up unafraid to battle a thoroughly modified (turbo) New Edge Mustang.

Because we are dealing with a quarter-mile race here, there’s no point in bringing up the turtle and hare fable, since no one is “sleeping” when at the dragstrip. Instead, both racers were more than keen to showcase their rocket-like abilities. And, frankly, none of them were disappointing.

Sure, the unthinkable did happen, with the Miata edging out (pun intended) this third-generation Mustang, if only by a whisker. It was clearly a surprise, even for the announcer, who obviously got mesmerized by the close-quarter track battle.

In the end, they are both worthy of praise. Though, perhaps the MX-5 is a little more worthy, given its 8.26s victory against the Blue Oval’s almost equally astounding 8.33s result! 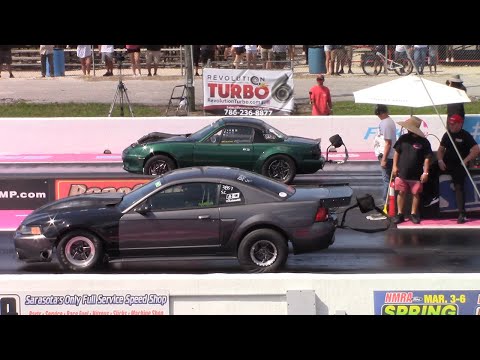