3 Bentley and Breitling Ready to Part Ways, Recall the Highlights of 19 Years Past

We love a great-looking vintage watch, but also want the advantages of a contemporary timepiece. Swiss watch manufacturer Ollech & Wajs gives us the best of both worlds, with a newly-launched watch that’s inspired by a vintage military motorcycle.
7 photos

The robust, yet elegant OW 350CI catches the eye with its khaki dial and yellow indexes that comply to military color codes, plus the 20 mm (0.7”) Italian leather strap. But this watch isn’t just stylish, it’s a “tool watch” meant to be worn in any conditions.

The left-handed orientation of the large crown (a nine o’clock instead of a three o’clock position) is adjusted so that it doesn’t interfere with gripping the handlebars while riding a motorcycle.

According to the brand, this watch can be worn on the left hand, so that the crown doesn’t’ get damaged while riding, diving or during a mission. This timepiece is also special because it’s derived from both military and motorcycle riding backgrounds. The Swiss brand collaborated with a vintage motorcycle restoration workshop from Zurich, and this new watch is inspired by the one of the workshop’s projects, the Condor 350.

One of the iconic motorcycles in Switzerland, back in the 1970s and ’80s, the Condor 350 was made by a company founded by Edouard Scheffer and Victor Donzelot, who made their first model for the Swiss military in 1893. Atelier Zevaco, the Swiss workshop, has restored a Condor A350 powered by a Ducati 350cc engine with an inverted gearbox, and this is how the collaboration with Ollech & Wajs began.

The model’s name, OW 350CI, is also derived from the Condor A350 with its inverted gearbox (“commandes inversées"). It features a modern 12-hour rotating bezel and 2824-2 ETA movement with five positions and a 38-hour power reserve. This field watch’s case is also 300-meter waterproof. 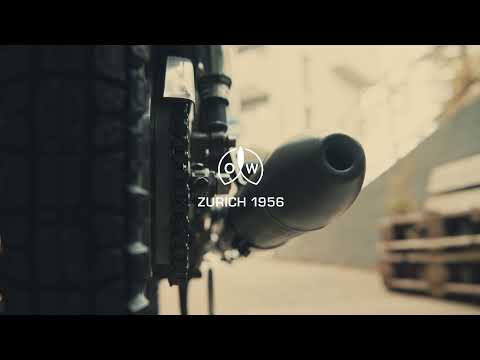