This Gold-Plated Nintendo Wii Was Made for Queen Elizabeth II, Is Now for Sale

Elena Gorgan
Royalists are in for a treat, because a 24-carat gold-plated Nintendo Wii created for Queen Elizabeth II has just been listed for sale on eBay. It’s still in impeccable condition, though it does bear the marks of time, and it comes with the most intriguing story.
13 photos

In fact, it’s this story that makes it such a compelling collector’s piece. In reality, this 2006 game console was dipped in gold as a PR stunt and, while it was indeed mailed to Buckingham Palace, it was never touched by royal hands, let alone by Her Majesty’s. But the mere fact that it was designed for the Queen and that it’s one of the most outrageous one-off consoles in the world gives it, well… royal status among all the other consoles. The peasants, if you will.

As of the time of writing, the golden Wii, as it’s often referred to, is for sale on eBay. The current owner – who is not the Queen but some Dutch collector named Donnie Fillerup, founder of the Console Variations website – is asking $300,000 for it. In an interview for his own website, he says he decided to sell it because he wants to buy a house for himself and – laugh if you will at how cliché this sounds – move out of his mom’s house. Donnie also says he was told he could ask as much as $1 million for the console, due to its iconic status and uniqueness, but he doesn’t want to be greedy: he only needs $300,000 for the house, so he will settle for this amount.

Donnie himself came across the golden Wii in 2017, more than a decade after it went missing. He doesn’t say how that came to be, but before that, the console was kept at the headquarters of American gaming company THQ. THQ is also its creator: in 2009, it had a new title coming out, called Big Family Games and, due to lackluster interest in it, it decided to do something really big to make an impression.

An earlier tabloid article claimed that the Duchess of Cambridge, Kate Middleton, had just bought the Duke, Prince William, a new Wii and that the Queen loved it so much she joined in for a game of bowling. THQ came up with the idea, clearly stated in the press release they sent out, to create a console worthy of the hands that would touch it, so they had it electroplated in 24-karat gold. The console ended up weighing 5.2 pounds (2.3 kg), but that didn’t matter: it wasn’t like the Queen would carry it herself from place to place.

Or, for that matter, that she’d ever lay eyes on it. As the video below, a 2019 viral episode from People Make Games, explains, while you can send stuff to the Queen via the Buckingham Palace mailing address, security protocols ensure that nothing ever gets through to her. Send her a twig from a nearby forest or a gold-plated game console, and you have just as many chances of it getting through: exactly zero.

The golden Wii made it all the way to the UK and the Palace, but it was sent back to THQ, something the company never publicized. It had gotten all the publicity it needed the first time around, with the announcement that it had made a Wii “for the Queen.” The console remained with THQ until 2012, when the company went bankrupt and then, for another five years, was probably traded between collectors.

Today, the golden Wii has iconic status. It is the only gold-plated Wii known and the only one to have been designed specifically for the Queen. The fact that it was never actually hers to play with means little to the community of collectors.

So, for $300,000 or the price of a house (to put things into perspective), you can get yourself a 2006 Wii 8 GB, with an included game of Big Family Games and the replica pillow both have been sitting on since Donnie bought them. Donnie says the console works and is in good condition, though it does bear the marks of time, which makes him believe it’s been “actually used at one point.” He’s offering framed authenticity documents, and insured shipment with tracking, so that the next owner will know for sure when his or her Royal Wii is nearing the castle its destination. 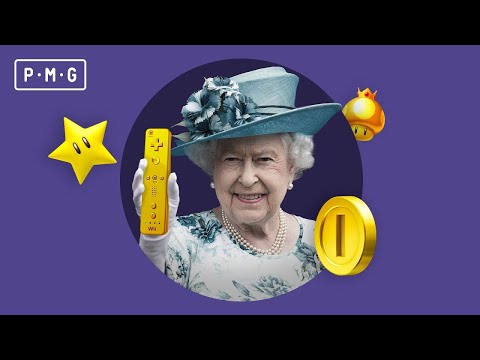