In theory, an iPad should feel at home in a car, pretty much because it’s a high-quality display that provides full access to the entire iOS app ecosystem.
6 photos

And when it’s part of a custom dash mode that fully integrates it into the cabin, the iPad turns into a new-generation piece of equipment that makes any driver out there totally forget about things like CarPlay.

In most cases, iPads are obviously used in landscape mode because this is how most car screens are installed in the first place. Of course, vertical screens are making their way to more and more new-generation vehicles as well, but at this point, a landscape display just feels right.

This doesn’t necessarily mean an iPad can’t be used as a vertical screen, though. And this latest project revealed on YouTube by Soundman Car Audio is living proof in this regard.

A large 11-inch iPad has been used for a custom dash mod created specifically for a Chevrolet Kodiak, and given the design of the panel, the only way to install the tablet was in portrait mode. While it might seem unusual at first, it’s probably just a matter of time until you get used to it, and apps like Google Maps and Apple Maps already take full advantage of the available screen estate anyway.

As for the build quality, this custom dash looks extremely premium, and this isn’t necessarily surprising. Soundman Car Audio builds top-notch custom dashboard panels to accommodate a full tablet, and the iPad kits that are being used allow for easy installation of such a device.

Needless to say, building such a thing yourselves isn’t necessarily impossible, but don’t expect the custom dash to look premium from the first attempt. On the other hand, this is the best way to integrate an iPad into the dashboard, making the driving experience feel substantially upgraded. 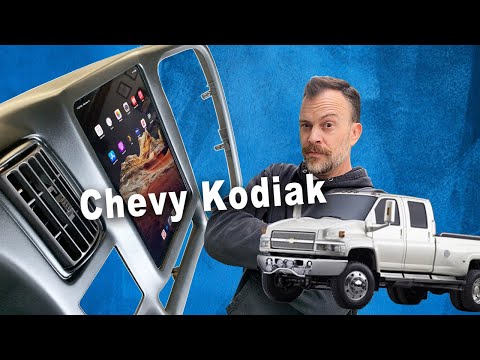