5 Apple CarPlay on Steroids: iPad Dash Mod Is the Right Way to Start an Audio Upgrade
Car video reviews:
Up Next

While they’re not as convenient and affordable as aftermarket head unit upgrades, custom dash mods allow for massive digital overhauls in pretty much every single car out there.
6 photos

Their purpose is as simple as it could be: modify the dash panel in such a way that the driver would then be provided with a larger screen, which in most cases is either an Android tablet or an iPad.

If you still have doubts regarding such an idea and you don’t believe a car interior would look good with an iPad in charge of the infotainment experience, maybe this new video published on YouTube by Soundman Car Audio can change your mind.

His latest project was specifically aimed at the 2005 Dodge Ram, but this time, the truck ended up being upgraded with a super-large screen.

A 12.9-inch iPad Pro was chosen for the task, so now the vehicle has a huge tablet in the dash, letting the driver enjoy the full iOS experience without any sort of limitations.

Furthermore, the custom dash mod retains the double-DIN opening, as it’s available right behind the iPad. In other words, when the tablet isn’t docked, the driver can very well interact with the original touchscreen in the truck, so at the end of the day, they’re not losing anything.

Thanks to this clever dash kit, the iPad Pro can also charge when docked, so it never runs out of battery. And given the Pro model comes with so many advanced capabilities, the driver can enjoy not only a large screen but also access to the entire iOS app ecosystem, fast Internet, and so much more.

Needless to say, pretty much anyone can try to build such a dash mod, but don’t expect it to look so premium without the necessary skills and tools, especially if this is your first attempt. 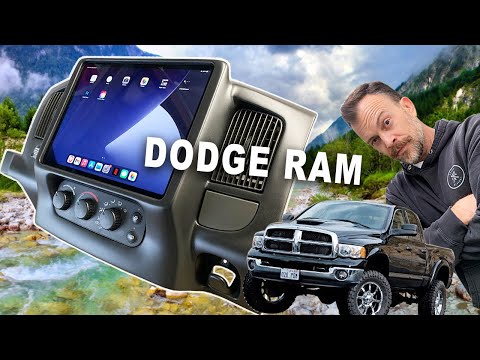