Third-Gen Chevy Caprice on 26s Ain’t No Donk, But Its Predecessor Was

Cristian Gnaticov
For whatever reason, people have started calling pretty much all vehicles riding on massive wheels donks. However, a donk is a 1971-1976 Chevrolet Caprice or Impala, so this third-gen Caprice isn’t one. But its classier-looking predecessor was.
9 photos

Apparently an ’87 model, which makes it the last update of the series before it was replaced by the fourth-gen in 1990, this classic Chevy Caprice was filmed getting a new attire.

The car got a new brown-ish paint job in Riverdale, contrasted by the chrome accents. It sits on a set of rose gold wheels, said to be 26 inches in diameter, and has a matching-styled steering wheel. The upholstery sports a similar color to the exterior, and unlike some previous builds that we’ve seen in the past, everything seems to be in very good condition.

This custom Caprice reminds us of a Chevrolet Impala that we covered a few weeks ago, with a brown paint finish and chrome trim. A 1996 model, that one also boasts 26-inch wheels, albeit in a more toned-down design and with a metal look. It too has a matching steering wheel, and for the cabin, the owner chose to trim it in beige leather.

As if that wasn’t enough to make it head-turner, which can be either a good or a bad thing, depending on the overall appearance, it is also a true party-starting machine.

The more modern vehicle made by the bowtie brand and customized to the teeth features a serious sound system that can make the trunk lid shake like crazy and the whole body vibrate. The two subwoofers mounted in the luggage compartment are 18 inches in size, apparently, and can literally rock your world, with the person filming it stating that the sound is unlike anything they had ever experienced. 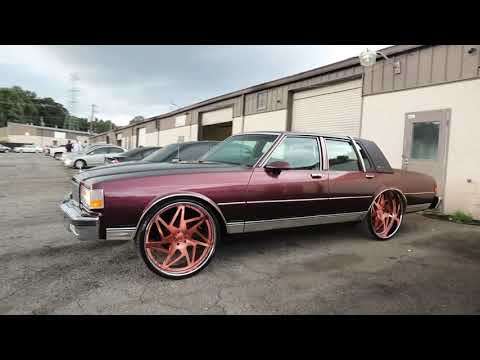