Seven decades after the introduction of the first Corvette in 1953 at the Motorama, the bow-tie brand unleashed the first hybrid version of this American sports car.

Zora Duntov tried to convince GM's management in the early '70s that a mid-mounted powerplant would create a better sports car, but the automaker didn't want to hear about that. Finally, in 2019, the automaker moved the engine behind the cabin. That affected the entire car's design. In addition, it created enough room for installing an electric motor on the front axle.

At first sight, it was the same C8 Corvette, but there were several details that split apart the ICE-only version from the hybrid one. The E-Ray featured a new bumper that resembled the one offered on the Corvette Z06 but without canards. On the sides, the body-colored air intakes were similar to those installed on the regular Stingray C8 and also sported the E-Ray badge on them. It was not big, but just enough to signal the different version. Finally, at the back, the hybrid Corvette featured four exhausts, two on each side of the car, flanking a center diffuser.

Inside, like the rest of its siblings, the E-Ray featured a steering wheel with an up-arrow design for the two spokes. Inside, the cockpit looked similar to the rest of the range, with an LCD in front of the driver for the instrument cluster and a second display placed atop the center stack. In addition, the tall center console covered the large battery pack used to power the vehicle.

But the most significant change was under the skin. Beside the naturally-aspirated V8 engine placed in the back, the E-Ray also featured a 160 hp electric motor for the front wheels. Thus, it was an all-wheel-drive vehicle but tuned for performance. No wonder it was the quickest Corvette ever. 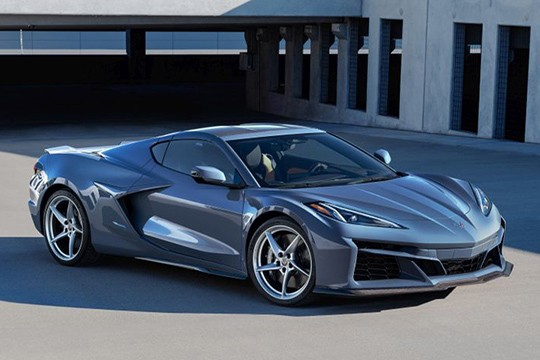