2 Hennessey Venom 650R: The Viper That Terrorized Supercars Back in the Late ’90s

3 With a Mid-Mounted 789-HP V10, the Renault Espace F1 Is the Wildest Minivan Ever Built

Tiny Home Luna Offers 256 Sq. Ft. of Luxury at an Affordable Price, It Sells Like Hotcakes

The German manufacturer is known for building the most iconic flat-six engines in automotive history, but for one of its greatest limited-edition supercars, a notoriously unreliable, race-spec unit was dusted off and transformed into one of the most amazing V10s ever produced.

The Story of Porsche's V10: From Failed Racecar Engine to the Heart of the Carrera GT

As you would expect, Porsche’s most epic engine had six cylinders, yet it didn’t come in a boxer configuration. Developed by the great Hans Mezger for the Techniques d'Avant Garde (TAG) Group, the TTE PO1 was a 1.5-liter, 1,000 hp turbocharged V6 that helped McLaren dominate Formula 1 in the mid-1980s. Sadly, the Fédération Internationale de l'Automobile (FIA) banned the use of turbochargers for the 1989 season.

Although the British team gave up on the famed motor two seasons earlier and Porsche retired from the championship, Mezger envisioned that he could turn the illustrious engine into an equally successful, naturally aspirated variant to help the manufacturer return to the competition.

Along with his team, the engineer designed and built a new V12 by fusing two V6 units. Of course, they didn’t just weld two blocks together; the process was far more complex, but, in a nutshell, the new engine was heavily based on the blueprints of the old six-cylinder.

Codenamed 3512, the 3.5-liter was ready for the 1991 season, with Footwork Arrows being the only team who decided to use it. Unfortunately for Mezger, the V12 was about 30 kg (66 lbs) heavier than those developed by Ferrari or Honda, and it wasn’t particularly powerful either. To make things even worse, it was extremely unreliable and tended to blow up during initial track tests.

After a few disastrous races, Arrows ended up going back to Ford-Cosworth DFR and eventually terminated its collaboration with Porsche.

For the next season, a lighter, more powerful V10 version was developed but none of the competing teams were interested, so the manufacturer was forced to retire from Formula 1 once again. The engine was shelved and forgotten until motorsport chief Herbert Ampferer, another of the German carmaker’s most influential engineers, decided to revive it.

In 1998, Porsche just kicked off the development of a new Le Mans prototype meant to replace the successful WSC-95 chassis. Initially, the plan was to use a modified version of the turbocharged flat-six found in the 911 road car. However, the resulting unit was just too heavy. Ampferer dusted off the old V10 and spent almost a year redesigning it for the rigors of endurance racing.

The 9R3 prototype (also known as LMP 2000) was also heavily modified to accommodate the new engine, and once everything was completed Allan McNish and Bob Wollek took it to the track for a two-day test. Both drives raved about the car’s performance, but by that time Porsche was allegedly pressured to halt the project by VW’s higher-ups. Some speculate that chairman Ferdinand Piëch didn’t want Porsche to compete against Audi’s R8 prototype at the 2000 Le Mans race, while others argue that manpower from the 9R3 team was diverted to the Cayenne SUV project. Regardless of what really happened, the V10 was destined to gather dust on a shelf once more, but, as it turns out, its story has a happy ending.

For the 2000 Paris Motor Show, Porsche was working on a concept car and the motorsport division was tasked with overseeing its completion. Instead of beefing up a flat-six and mounting it midship on a modified 911 chassis, Ampferer instructed the team to design a Le Mans prototype-inspired beast around the race-bred 5.5-liter V10. With a high-tech carbon fiber monocoque chassis equipped with a push-rod suspension system, center-lock wheels, and a spectacular body that looked nothing like previous models, yet was unmistakably Porsche, the resulting Carrera GT was a resounding success, which encouraged Porsche to start development of a road-legal version.

The ten-cylinder was upgraded once again, growing to 5.7 liters, and becoming the biggest engine ever fitted into a series-production Porsche. It maintained the 68-degree V angle and all-aluminum construction, gaining a slightly modified, chain-driven DOHC valvetrain with four valves per cylinder, variable valve timing on the intake camshafts, and sodium-cooled exhaust valves.

Powered by this amazing motor, the Carrera GT could accelerate to 60 mph (97 kph) from a standstill in just 3.5 seconds and achieve a top speed of 205 mph (330 kph). It wasn’t the fastest car in the world, but thanks to its superior handling, it became the fastest street-legal vehicle around the legendary Nürburgring Nordschleife in July 2004, when Walter Röhrl recorded a 7:28 lap time. The track record was broken several months later by the Donkervoort D8 RS, but the GT remained the fastest Porsche around the ‘Ring for the next six years.

Now considered one of the best supercars of the 2000s and the last great analog sportscar build by the German carmaker, the Carrera GT helped a seemingly cursed engine thrive and earn its place in the history books.

It started life as an epic failure, then shed two cylinders, becoming a Formula 1 engine that nobody wanted. After that, it spent several years gathering dust until it was converted into a promising Le Mans-spec unit, fitted in a car that was never allowed to race. In the end, it found its way into the Carrera GT, becoming one of the best production V10s ever conceived. 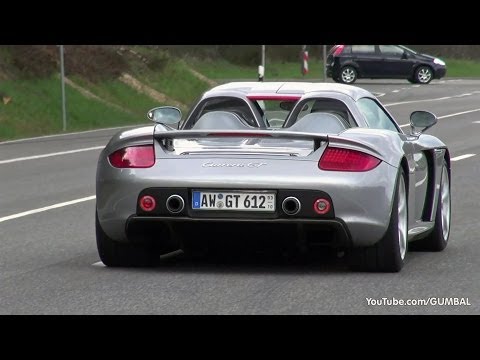