1 The Forgotten Fiat Turbina, a 1950s Sportscar Concept Powered by a Jet Engine

By now, we are all familiar with the X5 and its M-branded performance variants, which are among the most popular vehicles BMW has built in the last twenty years. But few of us remember the X5 Le Mans, a crazy, one-off show car powered by a race-spec V12 that lapped the Nürburgring faster than an E46 M3 CSL.

BMW X5 Le Mans: The Forgotten Concept With a Race-Bred 700-HP V12 Under the Hood

The Bavarian manufacturer recognized the potential of the vehicles we now call SUVs back in the mid-1990s. After acquiring the Rover Group plc, which included the Land Rover brand, it began analyzing the feasibility of developing the company's first SUV.

With new off-road technologies and engineering know-how at hand, the first-generation X5 was unveiled in 1998 and production began a year later. It was (and still is) marketed as a Sport Activity Vehicle (SAV), which for the German automaker means it is sportier than a typical SUV.

During the same period, BMW became heavily involved in motorsports, working with the experts at Williams Engineering on several fronts. After a disappointing Le Mans campaign in 1998, they returned to France the following season with a thoroughly improved car. The upgraded prototype, named V12 LMR, crossed the finish line first, giving BMW its first and only Le Mans title.

To celebrate this success and promote the newly released SAV at the 2000 Geneva Motor Show, the company came up with the idea of creating the craziest X5 ever.

The basis for this project was a production model shipped to Munich from the North Carolina plant since the X5 was never actually built in Germany. A team of engineers was already toying with the idea of developing a ridiculously powerful SAV and legend has it that the original plan was to use the V10 developed for the upcoming FW22 Formula 1 car. However, this was deemed too complicated and after the recent triumph in the world's most famous endurance race, they set their sights on the P75 unit of the V12 LMR prototype.

Part of the legendary S70 engine family at the heart of the BMW 850CSi or the epic McLaren F1, this blistering 6.0-liter twelve-cylinder was narrower and shorter than the original 4.4-liter V8, making the swap fairly straightforward. This also allowed the engineers to use a six-speed manual transmission from the 850CSi, which was connected to the powerplant via a twin-plate racing clutch.

Since there were no restrictions like the ones in place at Le Mans, the team designed a carbon-fiber intake manifold with twin 80-millimeter (3.15-inch) ducts that helped the engine spit out 700 hp. That's about 120 more horsepower than the version that powered the successful race car.

The stock transfer case was retained, and its standard 38/62 torque split was left untouched. However, the ABS module and Range Rover sourced hill descent system was removed to save weight, while the standard exhaust system was replaced with a bespoke straight pipe version which exited from the center of the rear bumper.

On the outside, the beefed-up SAV resembled the standard version closely with only minor visual changes. These included bulging fenders to make room for wider wheels, redesigned bumpers, and a carbon fiber hood that featured a large cooling vent. Along with the Le Mans moniker, the air vent hinted that this was no ordinary X5.

Inside, most of the standard elements like the dashboard were retained, but for Geneva, the spectacular vehicle was fitted with a new steering wheel, door panels, and four gorgeous bucket seats.

The interior was completely revamped after the show, as BMW was not done with the X5 Le Mans and was preparing to take it to the Nordschleife. The fancy bucket seats were removed and replaced up front with a Recaro race seat shielded by a custom roll cage on the driver's side and a regular cloth seat on the passenger side. In the rear, anything deemed unnecessary, including the seats was removed and replaced with seatbelt anchors and a fire extinguisher. The show wheels were also replaced with a set of silver and gold 20-inch BBS LMs.

In 2001, the two-time Le Mans winner and DTM champion Hans-Joachim Stuck set a lap time of 7:49 around the legendary racetrack, reportedly reaching 193 mph (311 kph) on the Kottenborn straight. No other SUV would beat that lap time for the next 19 years until the Audi RS Q8 (2020) and Porsche Cayenne Turbo GT (2021) managed to do so. For comparison, two years after that run, the E46 M3 CSL was almost a second slower. You can watch the X5’s run bellow, in a video posted on YouTube by CarsGarage.

The BMW X5 Le Mans concept never made it into production but is considered by many to be the first true high-performance SUV ever built. It is one of the wildest machines created by the Bavarians, and it proved that crazy ideas can lead to timeless masterpieces. 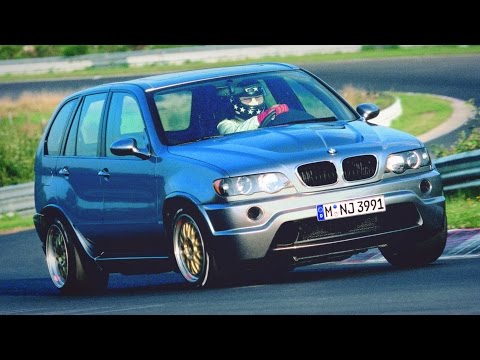