1 Bronson 50 Gives You the Thrills of a Powerboat, Boasts Stunning Premium Features

2 MY Roswell Is an Aggressive, Stealthy But Luxurious Vision of the Future

When it comes to leisure and entertainment, man has been displaying an almost unhealthy but understandable fascination with double-purpose vehicles. Add another one to the list: a hot tub that is also a boat, and the other way around.

The Hot Tub Boat Is a Boat That’s Also a Hot Tub, and You Can Buy It

Flying RVs, floating motorhomes, and flying cars, all these have been or are currently being attempted, to varying degrees of success. This one, the Hot Tub Boat, is a smaller-scale endeavor, which probably explains why it’s such a hit. It’s also the perfect vacation vehicle, a bucket-list kind of thing you should absolutely do if you’re ever in Seattle, Washington.

Or you could buy your own, and have it customized exactly to your liking, ready to take out at a moment’s notice. If you can afford it, that is.

The Hot Tub Boat is just what the name says it is: a hot tub that is a boat, and a boat that’s also a hot tub. It originates from Seattle and can be currently seen sailing leisurely on Lake Union. You can rent it by the hour and, depending on how much you’re willing to spend, have a lovely day out on the water, while you soak in the hot tub, or you could buy your own.

The Hot Tub Boat goes back to 2011, when the company’s founder Adam Karpenske was on his house boat, thinking of how awesome it would be if he could somehow put a hot tub on it. He decided he didn’t have enough space for this kind of luxury amenity, so he decided to do something else: turn a dinghy into a floating hot tub.

By January of 2012, he already had a prototype completed and, in the summer of that year, he launched the business of the same name, the Hot Tub Boat. It’s been flourishing ever since, welcoming tourists from all over the world, without weather restrictions. These floating hot tubs go out whether it’s sunshine or rain, and Seattle does get a lot of the latter.

Private customers with money to burn can get their own hot tub dinghy, as long as they’re willing to spend a reported $42,000 or more. The company makes each unit specifically for the client, so we’re guessing $42,000 is just the starting price. Even so, for a multi-millionaire looking for extra vacation thrills or a new toy, it would make sense.

Each unit is 16 feet long (4.8 meters), with a hot tub half that size smack in the middle. You get a tiny deck at the bow and aft, as well as hidden storage and coolers for whatever snacks and non-alcoholic beverages you might want to bring along for the ride. You also get a sound system with hidden Bluetooth speakers, while a diesel-fired boiler will keep the temperature of the water inside as warm as you want – though not warmer than 104 degrees Fahrenheit (40 degrees Celsius).

You operate the boat by means of a joystick, while in the hot tub or sitting on the aft deck after some training from staff. Propulsion is by means of electric motors, but don’t go picturing yourself zooming over the waterline while you’re chilling in that comfortably warm water in the tub. In keeping with regulation and to allow users to operate the Hot Tub Boat with just a driver’s license, the maximum speed is of 4 to 6 knots. You’ll basically be trolling, which is just perfect for the occasion, as it will give you ample time to enjoy the hot tub and take in the scenery. Total runtime is estimated at around nine hours on a single charge.

Loaded with water, the Hot Tub Boat weighs some 2,500 pounds (1,134 kg) but, because the tub is placed in the middle, it’s still able to float about 20 inches (51 cm) above the waterline and remains incredibly stable. Up to six people can lounge in it while it’s sailing, while docked capacity is of eight people.

As noted above, one such Hot Tub Boat, the only thing mission in your millionaire’s vacation fleet, starts at $42,000. The rest of us, much poorer, will have to settle for renting one when and if we’re ever in Seattle: it costs $350 per party for two hours, with an additional $100 for each hour after that. Guests also have access to showers and changing rooms at the facilities on the dock. 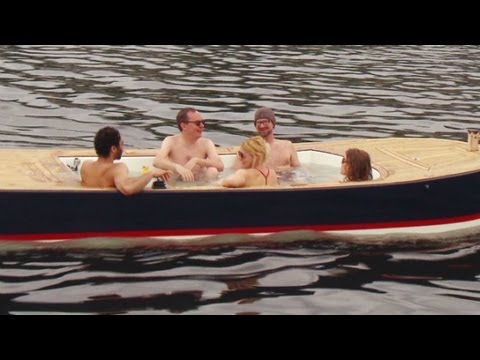