4 The Futuria Sports + Spa Motorhome Comes With Garage and Jacuzzi, Your Own Nightclub

Dreaming of the bright, more efficient and comfortable future, humanity can’t help but look back on the past, finding inspiration and motivation there. RDC Aqualines is also doing it, with the Aquas ekranoplan-like craft it plans to bring to market as early as 2024.

Pack your bags, the chariot of the future awaits. On paper it does, at the very least. August is Travel Month here on autoevolution, and we’re looking at some of the most outstanding (real) vehicles and concepts that would make travel better, more comfortable, more luxurious or cost-efficient. Aquas is all these things, packed up nicely in a craft that’s also versatile, fast and very convenient.

Aquas is a WIG craft, a wing-in-ground marine craft that uses ground effect to hover above the waterline. It looks like an airplane but, since it can’t achieve free flight like one, it’s classified as a marine vessel.

The idea for such a craft is not new. We know it as a GEV (ground-effect vehicle), which uses ground effect to hover in close proximity to a flat surface, which can be either the ground or more likely a body of water. The most famous examples of GEV are Howard Hughes’ 1947 H-4 Hercules (the Spruce Goose), and the Russian Ekranoplan the Caspian Sea Monster, which sank in the early ‘80s after almost two decades of work on it.

Powered by a 600 hp engine, the Aquas would have a maximum range of 600 km (373 miles) at full load, so it would be ideal for short-distance travel. Think of connections between islands, ferrying tourists, or regular transport at other tourist hotspots that have open bodies of water allowing for GEV use. However, it could also be used to haul cargo or as part of search and rescue operations, having the advantage of offering versatile loading and unloading: from a hardstand with ladders, from a berth or directly on water.

As a people-carrier, RDC Aqualines imagines the Aquas as a 12-seater furnished elegantly, with emphasis on comfort. The video below, as well as the photos in the attached gallery, offer an insight into the craft, as it’s envisioned in this stage of development.

Now, for the less-than-stellar part: the Aquas was announced in late 2020 and, while DesignBoom notes that it “will be available for high-speed travels in 2024” with construction underway in Spain, there’s very little on it on the official website. The same media outlet notes that Aquas will either be fully electric or hydrogen-powered.

RDC Aqualines boasts of being a multinational company, with offices in France, Singapore and Russia, which specializes in “design[ing], development and future production of a new generation of marine transportation vessels, using mainly the ground effect technology.” A “flying ship,” they call it, which is offered in various sizes, from a 3-seater to an ekranoplan-like “bike,” a hydrofoil speedboat and the ekranoplan-like ferry described above. That said, it doesn’t look like development on any of these GEVs is past the render stage.

Assuming Aquas arrives to market and that it does so early in 2024, it could still suffer the same fate as its much larger and impressive predecessors. GEVs have plenty of potential, with the most obvious advantage being that they can travel over land and water at high speed. They also have several major downsides, which explains why they’re not widely used, biggest of which are the high fuel consumption, the high production costs, and the fact that they can only operate over calm water.

But here’s to dreaming of the future. 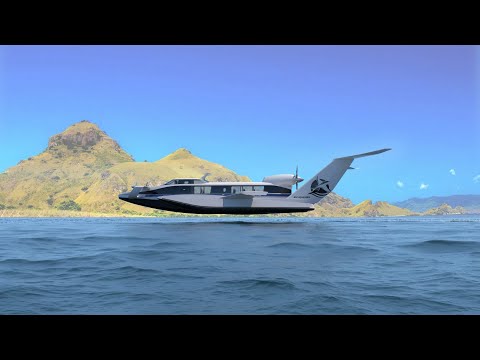