3 TFL Reviews Toyota 4Runner vs. FJ Cruiser vs. Lexus GX On the Road

Mircea Panait
We all know the story already. The Fast Lane is currently fielding 2020 Land Rover Defender number three after the first two proved to be duds over an electrical failure and an engine failure, respectively. But the question is, does the newcomer live up to Roman and Tommy Mica’s expectations?
87 photos

After road-tripping it from headquarters to Wyoming and back, The Fast Lane is much obliged to give a one-month ownership verdict on the unibody luxury off-road SUV. First things first, Roman can’t get enough of the looks of this truck even though truck isn’t the right word, in my opinion.

I won’t deny that Land Rover did an incredible job with the styling. Every little detail and every angle are homages to the previous model, but as opposed to ol’ body-on-frame grandpa, the interior of the Defender is obviously more luxurious. Don’t be fooled by the exposed screws on the door cards because this cockpit has more in common with the Range Rover than the Discovery. The powerplant is another glimpse of modernity.

Instead of a free-breathing V8 from Jaguar, the turbocharged straight-six engine with mild-hybrid assistance is pretty much aligned with the industry’s trends. A four-cylinder turbo is offered as the standard engine, although it’s undersized and underpowered for this vehicle.

Cavernous would be the word to describe the cargo area behind the second-row seats, and if you really need them, a couple of more seats are offered as well. Plastic floor lining is a nice touch in its own right, particularly because cleaning is much easier than when dealing with carpeting.

“Comfy and squishy” is how Tommy summarizes the on-road driving experience thanks, in part, to electronic air suspension with Adaptive Dynamics. Roman further highlights the lack of direct competitors for the Defender, which is a fair point. The Wrangler doesn’t live up to the plushness of this vehicle, the 4Runner TRD Pro doesn’t come close either, and the Toyota Land Cruiser is playing in a wholly different league.

What about the bad points, you ask? Well, the overall size makes it lumbersome on the trail and “the brakes are really grabby” in terms of pedal modulation. The infotainment system is very slow and tricky to operate, there’s no recovery hook out back, and the value is pretty abysmal at best.

“The issue is, the base spec isn’t all that premium,” concluded Tommy. “For $50,000, you get cloth seats, but you don’t get lumbar adjustments.” 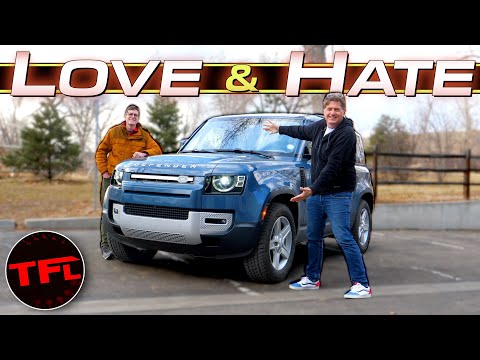