Land Rover unveiled a coupe version of its flagship model, the Range Rover, and promised a limited series that never came.

The Range Rover was built with a three-door bodywork in the first eleven years of production until the carmaker decided to add another two for the rear passengers. Over time, the carmaker built it as a five-door only.

With its massive grille that sported a 3D mesh design, the SV Coupe had a much more aggressive styling than the Range Rover Velar. Its wrapped-around bumper wore another pair of vents on its upper outer corners while a slim aluminum shield peaked under the middle section to remind that the car was still capable outside the paved roads. But the profile offered the most striking difference. The slightly sloped roof and the raked-forward tailgate created the image of a large hatchback.

Inside, Land Rover installed a similar dashboard as the Velar, covered in leather and wood veneers. The carmaker dropped the analog dials and installed a 12” digital instrument panel complimented on the center stack by a 10” infotainment touch-screen. A tall center console separated its leather-wrapped front seats with a storage compartment and the rotary gear selector. The carmaker extended the center console to the rear bench. Thus, it transformed the cabin into a four-seat-only cockpit with individual areas for each occupant.

Under the hood, Land Rover Special Vehicle Operation (SVO) division installed a 5.0-liter supercharged V-8 carried over from the production version but upgraded to 565 hp. The power went in all corners via an eight-speed automatic gearbox. Like any Range Rover before, the car featured a transfer case with high and low range gears. It also sported two locking differentials and a height-adjustable suspension. 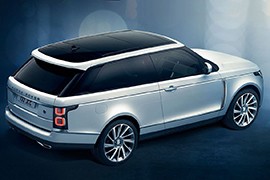 4 The Queen Is Full of British Humor, She Gives Her GPS a Rather Funny Nickname

5 The 2022 Range Rover SV Carmel Edition Is All About Extravagance, Comfort, and Exclusivity