2 2021 Ram TRX Street Drags Against Lambo Urus, Care to Guess the Size of the Gap?

Home > News > Car Profile
Mircea Panait
No less than $77,000 is the sticker price of the Ram TRX owned by The Fast Lane, and it’s pretty nicely equipped as well thanks to the first of two equipment groups and the red-and-black exterior. The question is, does the Hellcat-engined truck live up to the hype after two weeks of ownership? In many ways, the answer to that question is positive.
97 photos

For starters, Roman Mica makes a case for 4.5 seconds from naught to 60 miles per hour (97 kilometers) at a mile above sea level. That’s exactly the manufacturer’s quoted time, and don’t forget the TRX features 18-inch wheels complemented by 325/65 all-terrain rubber instead of summer tires.

Curiously enough, Roman describes the truck as “a little understated and a little bit of a sleeper” even though the sheer height of the TRX, the ginormous grille, and marker lights in the hood scoop beg to differ. In my humble opinion, only two half-ton pickups can match this Ram in terms of road presence, namely the Raptor and the GMC Sierra 1500 in Denali form.

“The interior is spectacular and a really great place to spend 1,400 miles, which is how far it took me to drive it from Detroit to here,” added Roman. Currently showing just 1,846 miles (2,971 kilometers) on the odometer, the TRX also impresses in terms of aural pleasure and driving experience.

In terms of not-so-great things about the TRX, the Goodyear Wrangler boots don’t feature the snowflake rating of the Ford F-150 Raptor. That’s not a big deal for most customers, but over in Colorado where it’s very cold and very snowy during this season, you definitely need snow-rated tires.

Speaking of the rubber shoes, these bad boys throw a lot of dirt on the mirror caps and front doors because there are no mud flaps that would alleviate this condition. When it comes to daily driving, Roman also wishes for the TRX to include backup sensors and blind-spot monitoring. Finally and understandably for such a heavy vehicle, the gas mileage is rather abysmal.

The TRX couldn’t do better than 10.5 miles per gallon (22.4 liters per 100 kilometers) on the way back from Detroit, which is pretty hardcore if you remember the Hellcat engine wants 91 octane or higher-grade fuel. All told, “calling this a super truck was the right call” according to Roman. 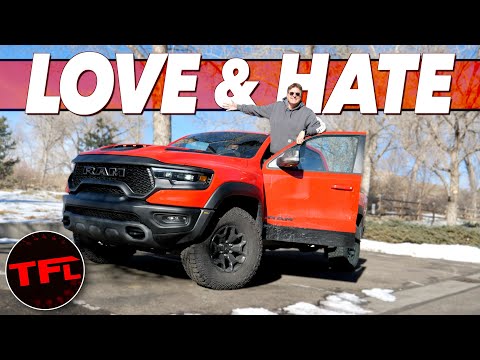