5 The Fast Lane Says 2021 Ford Mustang Mach-E Is Really Good, But Not Perfect
Up Next

TFL Reviews Toyota 4Runner vs. FJ Cruiser vs. Lexus GX On the Road

Home > News > Car Profile
Mircea Panait
A selection of three off-roaders on paved roads; this is pretty much the essence of the following comparison from The Fast Lane, and as far as on-road dynamics and comfort are concerned, there can be only one winner.
14 photos

In the old-school corner, we have the FJ Cruiser with retro styling and atrocious rearward visibility. Tommy Mica defends the off-road ‘Yoda because “it makes you laugh. There’s never been a boring car ever with three windshield wipers.” Discontinued in 2018, the mid-size SUV is best described as a Tonka toy that can be used for daily driving if you don’t mind the wobbliness of the short wheelbase and truck-like frame.

Moving on to the 4Runner, the TRD Pro is the one to get if you’re into weekend-long adventures on the trail. Pretty much the same mid-size SUV since 2009 when it was unveiled at the State Fair of Texas, the family-oriented sibling of the FJ Cruiser is more comfortable on the blacktop thanks to Fox suspension components and the Nitto Terra Grappler tires.

Bear in mind, however, that Toyota is asking a lot of money for this version. $50,470 before destination charge and desirable extras such as the running boards, to be more precise, which is top dollar by all accounts. The GX is a little more expensive, though, at $53,100 for the most affordable format.

“The 4Runner is certainly comfortable,” according to Roman Mica, but the Lexus takes the cake in three important areas. First of all, it features a V8 rather than six cylinders, and it’s a bulletproof powerplant to boot. Secondly and thirdly, the air suspension “makes for an incredible ride,” and all the gizmos in the cabin transpire into a boring yet serene driving experience.

Taking into consideration all the goods and wrongs, The Fast Lane agrees that Lexus is the winner of this comparison by a sensible margin. On the flip side, the 4Runner is very close behind in TRD Pro specification. As for the FJ Cruiser, well, that fellow is showing its age in more than one way. 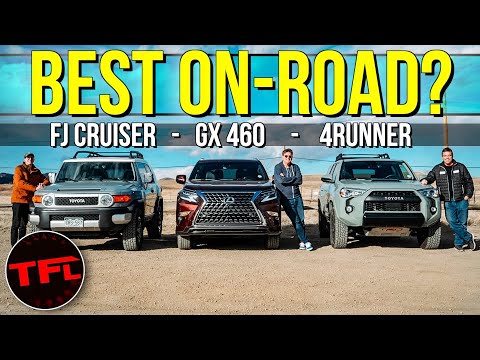