Mircea Panait
A bargain and a hell of a good little truck. That’s basically what The Fast Lane has to say about the Gladiator in the following video, which is a nearly base version of the mid-size pickup. Priced at approximately $39,820 on the window sticker, the JT actually starts at $33,565 excluding the destination charge for the stick-shift Sport trim level.
7 photos

At first glance, it may come as expensive to some people that haven’t looked at what four-wheel drive, a crew cab, and six cylinders mean for the Colorado and Tacoma. The Ranger doesn’t even count because Ford doesn’t offer a V6 option, at least not until the next-generation model that’s going to feature a similar ladder-frame chassis as the all-new Ford Bronco.

“But the wheels are pretty bland for a Jeep, don’t you think?” Of course, they’re indeed boring. But don’t forget that almost everyone changes them in favor of aftermarket units wrapped in chunky all-terrain rubber. It’s also worth highlighting that you don’t need to spend top dollar on the Rubicon for lockers. Quadratec, for example, offers ARB lockers for M210 or M220 axles with 29-, 32- and 35-spline configurations at $999, including shipping.

The Gladiator featured on The Fast Lane also happens to boast “a more comfortable interior than the Toyota” at the same price point. Managing editor Andre Smirnov doesn’t have a problem in the rear of the truck in terms of headroom and legroom, and even in this specification, the JT offers a couple of air vents and two cup holders for the rear passengers.

Towing may not be impressive at 4,000 pounds (1,814 kilograms) or thereabouts, but the payload rating certainly is at 1,192 pounds (541 kilograms). “It’s actually better than the diesel we test drove because that was like under 1,000 pounds,” said Andre, who describes the Jeep Gladiator in almost base specification as “kind of a daily truck that goes off-road.”

The question is, do you agree? Would you spend approximately $40,000 on this trail-rated model over a work-rated truck or a more reliable alternative? 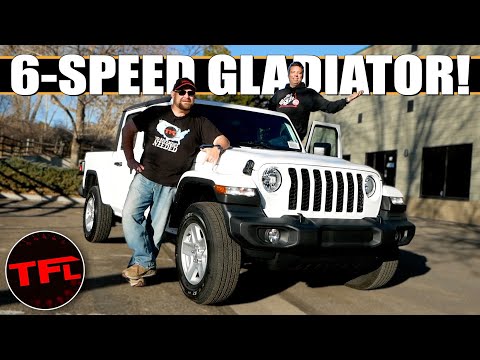