3 Powered by a Modern 392 HEMI, the Ringbrothers 1969 Charger Is Restomod Perfection

What do you do when you can’t decide which classic you like best? If you have the experience and the talent, you get together with equally experienced and talented individuals, and build your own vehicle.

The Chevy 789 Is an Elegant Frankenstein Monster With ‘50s Style

This is how the partly-infamous partly-legendary Chevy 789 was born. It is perhaps one of the most outstanding custom vehicles to come out of Anaheim, California, and definitely the build that put N2A Motors on the map as a vehicle fabricator.

N2A stands for “no two alike,” a very fitting name for a company that aims to deliver custom cars like no other. As co-founder Gene Langmesser sees it, he is in the business of making car dreams come true, and the Chevy 789 speaks to him on a personal level. It is, if you will, his own dream Chevy, made up of no less than three distinct Chevy classics and the chassis of a modern Chevrolet Corvette.

Langmesser started out as a project engineer for Porsche, a position he held from 1988 to 1992, during which time he became known as The Fireman for his ability to extinguish the small “conflagrations” that arose with any change to a design. N2A is his baby, born in 2002 out of the partnership with Fred Kanter of Kanter Concepts, which also makes aerospace parts for military contractors like Lockheed Martin Corp.

The first real headline-grabber to come out of N2A is the Chevy 789, or what many have described as an elegant Frankenstein Monster with ‘50s styling but modern handling and safety features. It’s a modern car with the look of a Chevrolet ‘57... and a ‘58 and a ‘59, and no, you don’t have to choose between the three.

Langmesser started the project from the idea that these three models had certain now-iconic features but otherwise lackluster or even disappointing ones. So he took the iconic ones and combined them into what is now the body of the 789: the front end from the 1957 Bel Air, the middle section from the 1958 Delray Ragtop, and the gorgeous rear end of the 1959 Impala.

The chassis is a Chevrolet Corvette, with the first units to roll off the tiny assembly line at N2A sitting on the 2007 model-year Corvette C6. By 2008, shortly after introduction, the shop had already sold no less than 18 such customs, which, in keeping with the name of the fabricator, were different in their own way. The recipe for the 789 is always the same, but some ingredients may vary; as Langmesser explained in an older interview: “We customize every one of our cars. I would never build two identical vehicles. Once a color is chosen, I take it off the market. We won't use it again.”

Once a chassis is chosen, and the customer makes the final choices on paint and interior, N2A gets to work on the body. The video available at the bottom of the page mentions that one unit takes some 5,000 work hours to complete: that is not accurate, as per Langmesser’s own admission in an older interview with Automotive News. A unit takes four weeks to build but up to 14 weeks for delivery because of the high demand and their limited capacity to work on more vehicles at once.

The body is fabricated of carbon fiber composite with layers of fiberglass, in a ratio of 80/20. Powered by a 6.2-liter V8 engine, the resulting car is 15.1 feet (4.6 meters) long and 6.3 feet (1.9 meters) wide and weighs 3,685 pounds (1,671 kg). With hardly any modification to the drivetrain, it is retro in styling but as modern as it gets in terms of safety features, handling, and amenities.

The interiors are equally customizable and range from retro-chic to very modern depending on budget and preferences, as photos in the gallery will show. Speaking of budgets, money is one aspect potential buyers have to keep in mind before reaching out to the fabricator: prices for the 789 start from $139,500 for the coupe, $144,500 for the convertible.

Then again, if you want a car that is unlike any other, the price won’t matter all that much. Langmesser promises you will get attention wherever you will go, to the point where you might feel “rude” having to pull out of the gas station 25 minutes after you’re done filling up, “because people are still gawking at the car, taking pictures and everything else.” 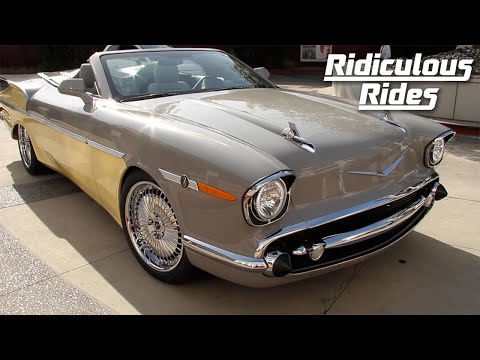 Google Maps And Waze Are Great, But Here’s What This Free Navigation App Can DoSee all coverstories