3 This 1968 Chevrolet Camaro SS Is a Movie Star, Has Been Sitting for Years

5 Modified 1968 Chevrolet Camaro Was Once a Drag King, Wants More Racing
Car video reviews:
Up Next

Restoring a car that's no longer a matching number vehicle might be a total loss for the restorer, and that's why many people chose the restomod alley, and some get astonishing results.
12 photos

Sure, the "astonishing" might be overused an overstatement. Still, since this car has a golden badge from the 2017 SEMA, it might be just proper to use it. So now that we got your attention let's talk about this 1968 Camaro. According to the VIN, this car started its life in the Van Nuys plant with a V8 under the hood.

The story behind this build is exposed on the builder's site, no other than Chris Holstrom Concepts from Puyallup, Washington. This car came in the store in 2016 brought by a customer who built it with his son. He wanted an LS3 engine swap, but they didn't have that much interest in it anymore. That sparked an idea, and Chris called Steve Peterson, the actual seller, who was looking for a work-in-progress '68 Camaro. The car traded hands, and the new owner assigned the specialty shop to complete the job.

The paint was refreshed with a metallic-blue color adorned by an orange and matte-gray treatment. Other upgrades included carbon-fiber spoilers. The Forgeline three-piece wheels are 18" at the front and 19" at the back, wearing 255/35 tires up front and 305/30 at the rear.

Under the body, the builder placed new, upgraded JRi Shocks coilovers and splined sway bars on both ends. At the front, a Detroit Speed subframe with tubular control arms was added, while the rear received a Detroit Quadra Link system. Stopping power is ensured by Baer six-piston calipers with cross-drilled and slotted discs in all corners.

The customer opted for Corbeau bucket seats with a four-point harness and a matching-looking rear bench with suede inserts for the interior. In addition, a detachable harness-bar was added between the B-pillar, just if he needed some passengers in the back. The Momo Jet steering wheel might not be everybody's cup of tea, but it's one of the easiest things to replace if needed.

A new Dakota Digital instrument panel replaced the old dials. It includes a 160 mph (257 kph) speedometer and an 8,000 rpm tachometer. Here, the odometer shows 5,500 miles (8,851 km), which represents the mileage from rebuilt. The car's total mileage is unknown and, honestly, doesn't really matter. The car was a joy on the road, as the builder said, also thanks to the new Vintage AC unit and the JL Audio sound system.

But things don't stop here. The seller also added a three-wheel 1984 Honda ATV with the same metallic-blue and orange paint scheme on Bring a Trailer site for this auction. Admittedly, it might pale next to this restomod '68 Camaro, but it is a nice build. It is also worth mentioning that only the car may wear license plates since the ATV is not road-legal. 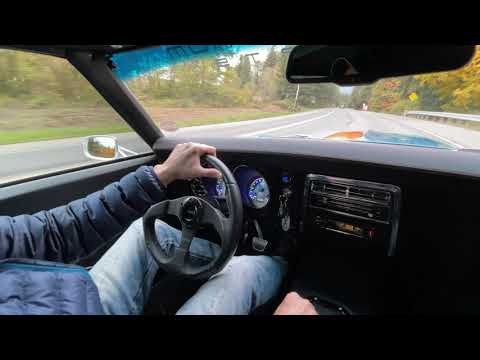 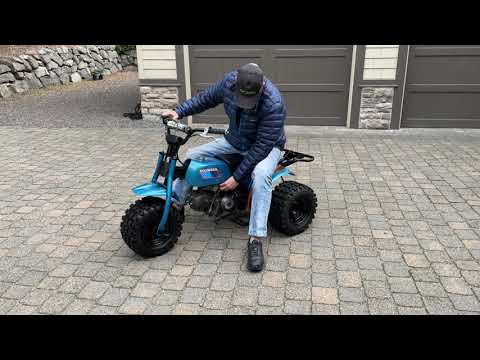