5 Jeep Pickup Is Ready to Retire the Gladiator, Give the Tesla Cybertruck a Headache
Car video reviews:
Up Next

Home > News > Car Profile
28 Dec 2021, 18:28 UTC ·
by Stephen Rivers
Volkswagen has always set the bar for practical hot hatchbacks. The Golf GTI did it first, and then the dial got turned up to 11 with the Golf R. Now, an all-new version is out and, Doug DeMuro is diving into all of its quirks and features. It turns out that while the car is better than the last one, it's still got some pretty lackluster features.
6 photos

Doug starts us out with a full tour of the inside of the Golf R. In front, this car is full of odd choices. First, there's a weird, fake carbon fiber-styled textile integrated into the seats.

Then there are big blue sections that correspond to the Golf R theme color. What's weird is that they're almost exclusively located on the back of the seats where you can't see them. The rear seat headrests are similarly styled.

Then DeMuro points out the odd center control area in this VW. First, the gear selector and the start/stop button are all pretty bland. They don't look or feel special at all. Doug says the same of the interior quality overall. Many of the panels are made of cheap plastic, and he's surprised to see that in a car that costs $45,000.

Then there's the infotainment system which lacks any sort of volume knob in favor of a slider system. Ask Honda how that'll work out. There's also no way to operate the climate control without going into a specific menu. The infotainment system, in general, isn't all that intuitive, according to DeMuro.

Overall, the whole car feels more like a regular Golf and less like an R, says Doug. Its saving grace is that it's still good to drive. Of course, it's also helpful, as DeMuro points out, that the Golf R lost its only real competition when the Focus RS was canceled.

So there you have it. The Golf R is a bit cheaply made but still drives great. It's both the best and the worst in its class of one. 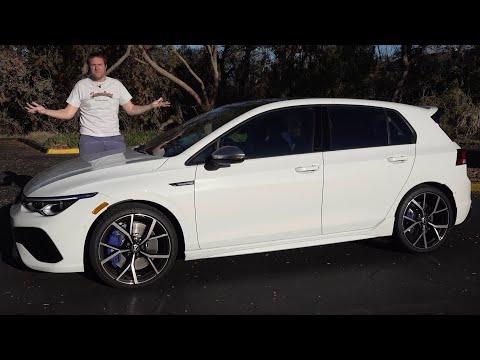