5 Mercedes-Benz, AMG Issue One Hot Recall Stateside for More Models Than This Title Can Fit
Car video reviews:
Up Next

Home > News > Car Profile
Stephen Rivers
The new Mercedes-Benz EQS is a technological marvel. Doug DeMuro takes us on a deep dive into every aspect, and it's a bit mind-blowing. For instance, did you know about the ghosts in the EQS? You're about to.
6 photos

Doug has driven every major EV that's on the market right now. Rivian R1T, Tesla Model S Plaid, Lucid Air Dream Edition, all of them have seen their quirks and features laid bare. That's why it's so surprising that DeMuro counts the EQS as the pinnacle of luxury in the EV market right now.

Of course, he doesn't make that call lightly. The Hyperscreen, for instance, is immediately shocking. It's gigantic and to say that it's featureful is the understatement of the year. It covers the entire dash in what are actually three separate screens that are very well integrated. What's even more shocking is how playful the screens are.

Mercedes has installed something called "Graphical Goodies," which will surprise you all year round with special little graphical changes. Doug shot this video on Halloween, so lots of graphics in the system were appropriately themed. Just one example was the ghosts in place of the normal slider handles. That's a very fun detail.

Still, playful technology isn't enough to make this the most luxurious EV on the market. This thing also uses a fingerprint scanner to save different driver profiles. It can even set the driver's seat to the optimal position for you on its own if you ask it to.

Then there's the heads-up display. It's so advanced that it will show you as it tracks the car ahead of you and tell you when it changes something. The heads-up navigation will even show you arrows where and when you have to turn. All of this happens in real-time.

Of course, no luxury car would be complete without a spacious back seat, and the EQS checks that box too. It also has a touchscreen climate control system for back seat riders. Finally, this thing has to ride incredibly well, right?

Well, it's not fast. It only has 330-horsepower, but Doug is still seriously impressed. He says after driving around for a few days, he wishes he had the Hyperscreen in every vehicle he owns. He also says that the EQS is better than the S-Class. It has better tech, is just as comfortable, and is more practical, he says.

That's high praise, but from everything we're seeing, we can understand how he got there even though it does look like a used Euro Honda Civic. Be sure to watch the whole video for a lot more quirks and features. 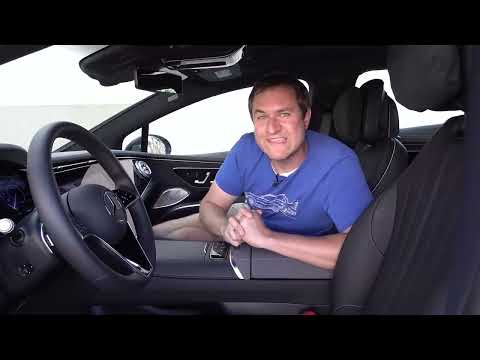