1 Jeep Pickup Is Ready to Retire the Gladiator, Give the Tesla Cybertruck a Headache

3 Two YouTubers Sentenced After Filming Themselves Driving Over 120 MPH

Stephen Rivers
There's really nothing out there that can keep up with the Nevera in a straight line. Even the Tesla Model S Plaid isn't fast enough and loses the 0-60 run by a tenth of a second. Of course, the Rimac broadens that gap considerably from that point on.
6 photos

Rightly, Doug starts out by reminding us that while Rimac might not be a household name like Bugatti, that it will be soon enough. Rimac, after all, owns the majority share of Bugatti now. So we can expect quite a number of ridiculously fast and powerful cars from both brands in the near future.

Onto the quirks and features then. For instance, because this is a pre-production Nevera, there's no key. The door doesn't lock. Getting in just requires a touch of the door button hidden near the side-intake scoop.

Inside, DeMuro starts by showing us the Start button. It's located on the left side of the steering wheel and also features the gear selection. What's more special though are the dials in the center section of the car.

Rimac has a full selection of different drive modes so you can get more range or power or customized settings. Then there's a tiny hidden dial that controls traction control and stability control. On the right side of the center stack is the torque dial where drivers can specific how much torque goes to the front or rear motors.

That means you can make your Nevera 100% front-wheel -rive. No word yet on if anyone has ever tried that for more than just testing purposes. We imagine that rear-wheel only is considerably more popular.

Then Doug shows us the cameras in the Rimac. Not only can these record track laps to help you get faster but they can do something even more special. The interior camera will use facial recognition to recognize and adjust settings based on who's in the driver's seat.

Of course, the Rimac also gets cup holders which were apparently tested at speed. Good to know that we can go racing with our Red Bull safety stowed. Then we get into some of the pre-production stuff that isn't finalized.

The infotainment system looks like it'll be awesome once finished. Right now, just the touchscreen functions and has a lot of cool features. Below that, a touchpad and a joystick/volume knob are installed but are non-functional currently. Once done, all three options should make life easier in the Nevera.

More importantly, the Nevera is quite functional as a hypercar. Doug is clearly excited to get behind the wheel which is saying a lot considering he doesn't actually love driving everything he reviews.

So, of course, he starts out with nailing the accelerator pedal and is completely shocked. Not only is it fast immediately, but it doesn't stop accelerating hard after the first few moments.

That experience is going to change the game according to Doug. It doesn't matter what people love or want, if speed is the most important thing, cars like the Nevera will take over. They're simply too fast not to. 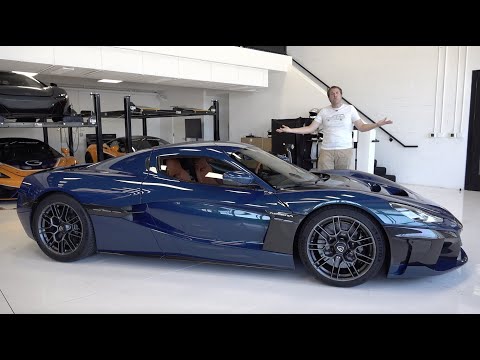